On February 28, 2018, Canon brought its latest patent enforcement efforts against 49 aftermarket manufacturers, distributors, and sellers of new-build compatible cartridges. These actions have been brought in U.S. district courts, and before the U.S. International Trade Commission (USITC). Although the lawsuit has been analyzed by many, no one has yet discussed what it means for the aftermarket going forward.

After analyzing the patents that are the subject of the suit, along with the actions Canon has brought before these actions, aftermarket suppliers of new-built cartridges may have serious legal and technical impediments for future manufacturing of Canon cartridges equipped with a dongle gear drive mechanism.

Who are the big winners?  Remanufacturers that are able to reuse the OEM gear and dongle.

All the patents in the first action brought by Canon over the dongle gear (“Dongle Gear I”) required a coupling member that was “tiltable” with respect to the OPC drum.  As shown in Image 1 taken from Canon’s patents, when a cartridge with a “tiltable” dongle is inserted into the printer, the dongle (15150) moves from a tilted position (top left drawing “a”) to a straight position (bottom right drawing “d”) relative to the OPC drum (107) as it engages with the printer drive pin (180).

When the cartridge is removed, the reverse occurs and the dongle tilts out of alignment with the OPC drum.  This tilting allows cartridges with an OEM style tilting coupling member to be smoothly engaged and disengaged from the printer drive system. 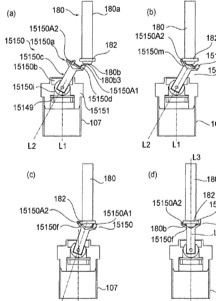 The Dongle Gear I litigation targeted copycats of the tilting dongle OEM design.  In response to Dongle Gear I, the new-build cartridge manufacturers began coming up with “non-tilting” dongle gear replacements.  Ninestar, Aster, Print-Rite, and Static Control Components all came up with variations on a retractable dongle design.  In these designs, the dongle remains in line with the OPC drum, but is moveable in and out of the drum, somewhat like the plunger in a syringe. 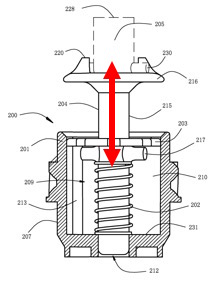 Developing the new workarounds was not a seamless transition. Early versions of the designs faced many issues, most notably difficulty inserting and removing the cartridge from the printer.  In some cases cartridges would get stuck so badly hand tools were required to extract them.

Nonetheless, in the time it took the ITC and U.S. Federal Courts to hand Canon its victory, the aftermarket suppliers had refined their non-tilting dongles and had begun successfully importing and selling compatible cartridges equipped with these designs.  Canon was well aware of this development as  settlement documents from the litigation and press releases from some of the aftermarket suppliers all referenced the non-tilting dongle replacements.

But Canon was not defeated, as its next and latest move was, perhaps, its checkmate. As the aftermarket had shown its hand, Canon began filing “continuation” patents specifically targeting the non-tilting dongle designs.  Although filed with the patent office after the aftermarket designs were released, these continuation patents are treated as though they were filed in 2006 – when Canon first filed for protection on the dongle gear design.

There was no prior art for the non-tilting dongles that dated back that far.  And it’s a well-settled rule of patent law that a patent holder can file a continuation application claiming its invention in a slightly different way.

By obtaining patents covering movement of the dongle toward or away from the OPC drum, Canon has put the aftermarket manufacturers in a very difficult position.  How will the aftermarket design a dongle gear that doesn’t rely on such movement, while also providing smooth installation and removal of the cartridge from the printer?

Moreover, even if new build compatible manufacturers come up with yet another functional design that gets around one or more of Canon’s patents, there is nothing stopping Canon from filing even more continuation patents covering those new designs. 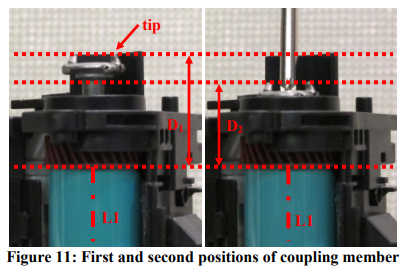 This case highlights another often misunderstood aspect of patent law – just because you have a patent on your design does not mean you are safe from infringement.  As noted above, Print-Rite has patented the design that Canon now accuses of infringement.  Static Control, Ninestar, and Aster also all hold U.S. patents on their respective designs.  In fact, Static Control and Aster are currently engaged in their own patent infringement skirmish based on their respective retractable dongle designs, and now both have been sued for infringing Canon’s latest patents.  Their patents provide no protection from Canon’s patents, which are deemed first in time.

Aftermarket members have managed to outsmart or outrun the OEMs before, and may again this time.  But that route is neither obvious nor inexpensive.  And while some current manufacturers may continue to offer indemnification for their products against a potential Canon lawsuit, that protection may be short-lived.

It is only a matter of time before the current new build replacements for Canon’s dongle cartridges become subject to a General Exclusion Order (GEO), which Canon has already requested from the USITC. Then these products will be prohibited from entering the country.

So as it was before the arrival of the new-built cartridges, it appears remanufactured cartridges, with reused OEM gears, may once again be the only legitimate competition for new OEM ones.

You can add your ideas and thoughts on this article, “The Latest Dongle Gear Actions: Canon’s Checkmate” below or directly with Tricia Judge by email.