How 337 Investigations Defined an Industry 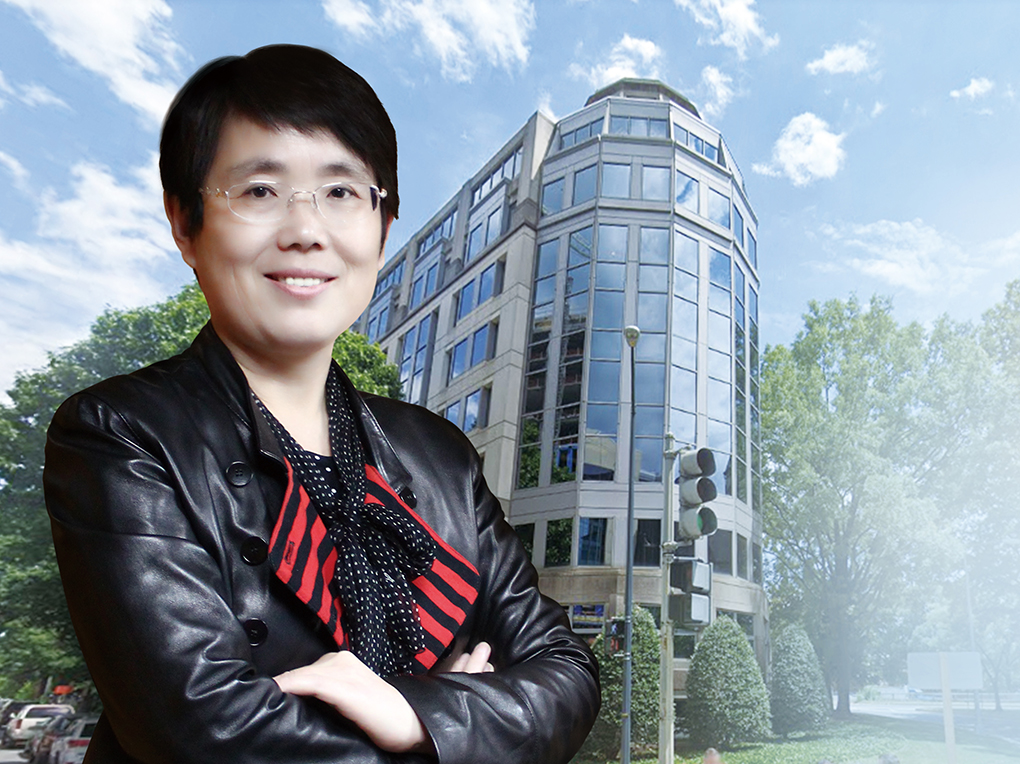 The printing consumables aftermarket has been overcoming obstacles for 40 years. Despite the odds, it has made great progress.

Looking back, the global industry has experienced intense battles with the printer OEMs particularly with lawsuits in the European and the United States courts, the more recent battles over online takedowns on Amazon, and frequent and powerful 337 investigations in the US International Trade Commission (USITC).

As of June 30, 2021, there have been seventeen 337 investigations in the printing consumables industry (for a detailed list, scroll down to the end of this page). Nine investigations ended up having General Exclusion Orders (GEOs) issued. In March 2021, Canon filed two 337 investigations and it is quite possible the USITC may again issue two GEOs. If so, that would bring the number of GEOs to 11.

In the face of continuous 337 investigations, China’s domestic printing consumables companies have gone from being ignorant and timid to holding a more rational response. The experiences and lessons learned are worth our consideration. In this article, I list and review six typical 337 investigations that would have impacted and defined the printing consumables industry, not just in the USA and China but beyond.

Section 337 Investigations in the U.S.

Section 337 investigations are quasi-judicial procedures conducted by the USITC over intellectual property infringements and other unfair competition behaviors in import trade. may result which include general exclusion orders (GEOs), limited exclusion orders (LEOs), and Cease and Desist Orders (CDOs). GEOs and LEOs are enforced by the U.S. Customs.

A product that is the subject of a GEO is deemed to be infringing and is prohibited to be imported to the U.S. regardless of the origin of the imported product. All manufacturers, importers, and distributors of the product would be impacted, even if they are not the accused company or even involved in the case. The products are simply “blacklisted” and cannot be imported or sold in the U.S. Some GEOs play the role of “clearing the field.”

The 565 case was the first 337 investigation to be faced by the printing consumables aftermarket. On February 17, 2006, Seiko Epson (Epson) filed a 337 investigation complaint, accusing 24 companies (including nine Chinese companies) of importing and/or selling inkjet cartridge products in the United States, infringing 11 patents it holds in the U.S. and requested the USITC to issue a GEO.

The patents asserted in the 565 case mainly involve the sponge, sealing ring and chip of the ink cartridge, such as the 7-contact chip ink cartridge. The U.S.  patent US6502917 (917) in the case shown in Figure 1 below shows the arrangement of the chips.

Due to the concern the products may infringe the patents from a lack of understanding of 337 investigation rules, many companies were “non-participating” or found to be in default. Some companies actively participated in the case, which took about one and a half years, and on October 19, 2007, the USITC issued a GEO,  LEO, and CDO.

The participating company appealed to the U.S. Court of Appeals for the Federal Circuit (CAFC). The CAFC upheld the USITC ruling.  Later, some companies carried out a Customs Ruling and USITC Advisory Opinion, which took several years and cost a lot of money.

As a result, the ruling, in this case, dealt a huge blow to China’s compatible ink cartridge industry, which was on the rise at the time. The orders prevented many compatible inkjet products from being imported into the United States.

It is worth mentioning that the Print-Rite Group was the first company in China involved with inkjet consumables. As early as 2000, Print-Rite had made innovative workaround designs for the OEM inkjet-related patents. The company launched its innovative 86T ink cartridges for which it was awarded the 9th China Patent Gold Award, jointly issued by the State Intellectual Property Office of PRC (SIPO) and the World Intellectual Property Organization (WIPO).

On June 28, 2010, Canon filed a 337 investigation, accusing 20 companies (including six Chinese companies) that the toner cartridge products imported and/or sold in the United States infringed two of its US patents US5903803 and US6128454, and requested the USITC to issue a limited exclusion.

The primary company involved in this case began to actively respond to the matter. As it was considered it might be difficult to invalidate Canon’s patent along with the high costs involved, all defendants signed a consent order with Canon in April 2011, agreeing not to import or sell the toner cartridges involved in the US. After lasting about a year, the case was officially ended on May 5, 2011.

It took Canon less than a year after concluding the 337-TA-731 investigation to file a second 337 investigation. On January 23, 2012, Canon accused 34 companies, including four Chinese companies of importing toner cartridges into the U.S. that infringed two of its U.S. patents. These two patents were the same as the patents in the 731 case. But this case had a broader scope and Canon requested the USITC to issue a GEO.

In the 829 case, one defendant ended the investigation based on a consent order, with all other defendants not responding and found to be in default. After nearly a year and a half, on June 28, 2013, the USITC issued  GEO and  CDO.

In the 731 case, Canon had only requested a limited exclusion order for the listed respondents. In the end, all respondents were terminated from the investigation by signing consent orders. This may be the correct strategy for the patent right holder. It first targeted specific enterprises to “pilot” blockade, and then proceed to the entire industry, as was achieved with the 829 investigation.

As with the 565 case (mentioned above), Print-Rite was also not listed as a respondent in the 731 and 829 cases. This is because the company had innovatively designed its own solution for the OEM’s twisted gear patent back in 2007. It launched its innovative design of the “No-Twist gear” and obtained its own U.S. patent (US8275291). 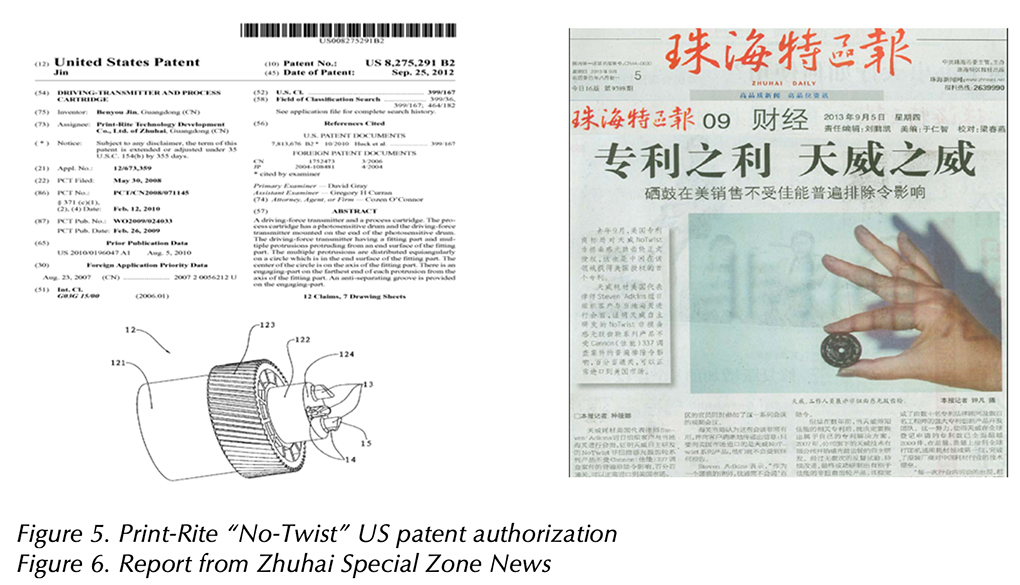 On May 7, 2014, Canon filed a 337 investigation complaint with the USITC accusing 33 companies, including 11 Chinese companies of importing and/or selling toner cartridges in the United States that infringed nine of its US patents. It requested a GEO.

Of the Chinese defendants, only one company failed to respond and the remaining companies actively responded to the complaint. The investigation lasted fifteen months and on August 31, 2015, the USITC issued a GEO and a CDO.

To my understanding, the “dongle gear” is a technical update iteration carried out by the patent right holder considering the performance of the “twisted gear” product and the protection period of the patent. From technological innovation to its worldwide patent protection, it can be regarded as a classic R&D and IP model.

Around 2013, Canon upgraded and innovated its “dongle gear” design. Between 2016 and 2017, it used the US patent continuation application to file new patent applications and to further expand the scope of claims of the patents asserted in the 337-TA-918 case.

Within six months of this batch of continuing patent applications being granted, a new 337 investigation complaint was filed on February 28, 2018, accusing 49 companies, including 14 Chinese companies of importing and/or selling products in the United States that infringed its nine of its US patents. It was instituted as the 337-TA-1106 investigation.

The main defendants in the 1106 case, Ninestar and Print-Rite, each responded actively.

On August 30, 2018, the USITC held a ‘‘Markman hearing” where both sides debated the scope of protection of the patent claims involved in the case. On February 28, 2019, the USITC Administrative Law Judge (ALJ) made a restrictive interpretation in favor of the defendant. Then, on March 13, 2019, the ALJ made an initial determination and ruled Ninestar, Print-Rite, and others involved in the case had not infringed. On May 20, 2019, the USITC affirmed the ruling made by the ALJ and terminated the investigation. On April 20, 2020, the CAFC upheld the USITC non-infringement determination.

Compatible consumables manufacturers such as  Ninestar and Print-Rite achieved a full victory in this case—an important milestone victory after a decades-long battle over intellectual property disputes.

The 1174 case is the first 337-investigation filed by Brother Japan (Brother). On August 19, 2019, Brother filed a 337 investigation complaint with the USITC, accusing 32 companies, including eight Chinese companies, of importing and/or selling toner cartridges in the U.S. that infringed its five U.S. patents. Unlike the previous 337 investigation, most of the defendants in the ‘1174 case were Amazon sellers or distributors, with only one manufacturer being named.

A total of 11 companies responded to the complaint. While actively defending, some of the companies in the complaint successively launched new non-infringing designs and confirmed with Brother through “Joint Stipulation” that the new innovative design would not be subject to any exclusion order.

The matter lasted one year and three months. On November 23, 2021, the USITC made its final determination and issued a GEO and CDOs.

From the above several typical cases, it can be seen that the characteristics of 337-investigations is having relatively short trial periods, high response costs and severe remedies.

The 40-year history of the aftermarket reveals it is either invests earlier for innovation or later for litigation. When dealing with OEM intellectual property rights, it is necessary to make Freedom to Operate (FTO) to exercise innovative design. When facing litigation, it should be professionally and rationally proceeded.

Only with continuous investment in technological innovation together with respect for intellectual property rights and rules can the aftermarket steadily survive and stand firm in an increasingly competitive market. 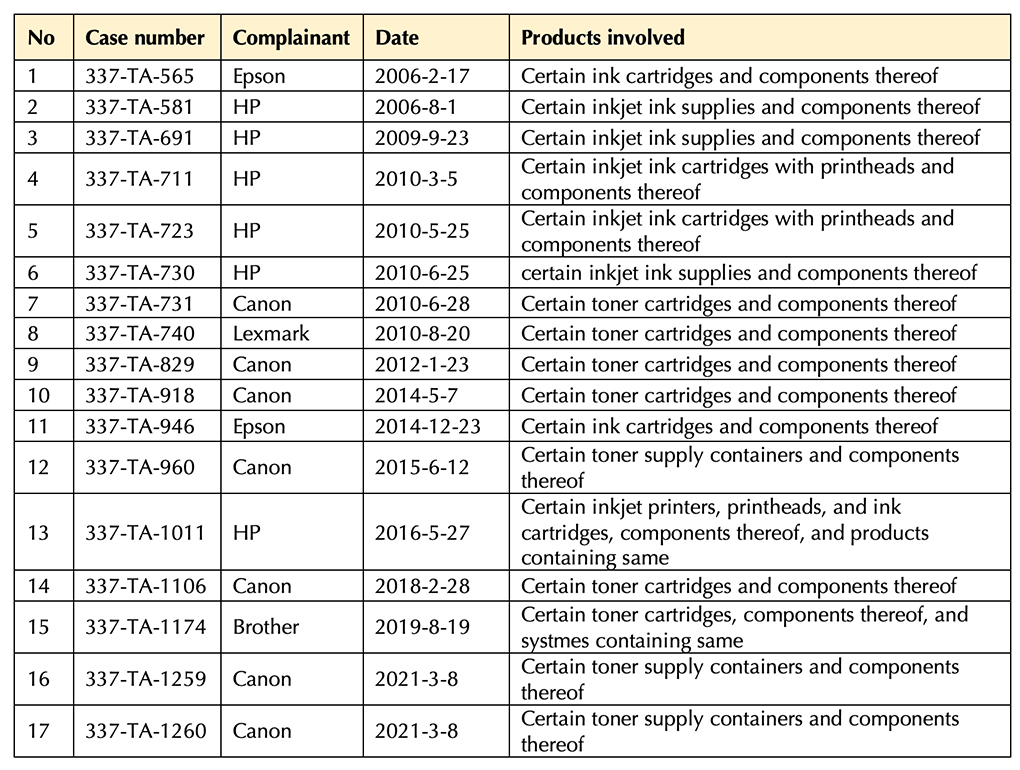 ** This article, “How 337 Investigations Defined an Industry,” appeared on pages 30-33 of RT ImagingWorld magazine which can be downloaded for free.

Please add your comment below about this article, “How 337 Investigations Defined an Industry,” or join the conversation on LinkedIn.

Indian Aftermarket Reacts to Border Clashes with China
From Fishing Village to World Capital in Just 40 Years
It’s Often True But Not Always True
Building Bridges Over Walls – Berto paves the way
Can the Chinese Really Deliver What the Rest of Us Want?
The Independent Resellers Lot – an interview with Ian Elliott
0 replies