Xerox: Between the Digital and Physical Worlds

Recently Xerox announced its plans towards continuous relevance. First, I will say, “For the past two years, Xerox has been leading in the boldness category.”

John Visentin and the Xerox team are not sitting on their hands or wasting time figuring out how many workers will remain remote to determine how many pages will be printed in offices post-pandemic.

Instead, Xerox is focusing on the realities of digital transformation, and they are positioning themselves to navigate their customers through that intersection I describe between the digital and physical worlds – in ways, their competitors still struggle to imagine.

In my thinking, Xerox has excellent opportunities in front of them. I was once extremely bullish on Xerox’s attempts at buying HP. After all, one of my past predictions in 2017 was that HP would buy Xerox. As it became apparent in 2019, any merger between Xerox and HP would most definitely only prove successful if Xerox’s leadership took control of the combined entity.

Well, we all saw the HP leadership and their board completely miss what I believe would have been an excellent opportunity for two iconic companies. However, today it appears Xerox has put HPs terrible decisions behind them.

We are beginning to see Xerox position itself to accomplish and exceed what they intended with an HP merger. Soon, I believe the HP board and the HP shareholders will look up and say, “If only we used our imaginations instead of listening to those insecure about their place in the future.”

Xerox does not need HP anymore! The global pandemic caused an awareness to all the actors in the entire supply chain of the print equipment, its supplies, and its services industry. However, the most critical awareness is the new realization from the millions of the equipment’s end-users that buying large copiers and MFPs for business communication is quickly out of vogue.

Today I think about HP in their obsession with disrupting the SMB and enterprise A3 marketplace by replacing already oversold equipment with more oversold equipment and their noise regarding home printers and the temporary subscription print contracts between $1.00 and $11.00 a month. I reaffirm my thinking that HP is stuck in its ink and can’t see past paper.

Xerox’s announcement of the three separate business units is a step closer towards building what I see as an SMB and enterprise services business model. Xerox is creating what the future could call B2B product service and support.

Office workers may say, call Xerox or, I already called Xerox and reported the Blank. Those reading this with any imagination can fill in that ‘blank.’

In the past and still today, people refer to their copier regardless of the brand, as a Xerox; office workers continue to say, “go Xerox this.” Xerox was a synonym to coping as the Kleenex brand of tissue was to tissue paper.

Some reading this are looking for why what I am describing is never going to be a reality. I have and continue to preach to those who think this way. Stop thinking about how things don’t work and instead think about how things can work. It’s within possibilities where probabilities become a reality.

Let’s think about the three business units Xerox sets up and then apply a little imagination and see what the suborned will miss.

On a recent, The End Of The Day With Ray! episode, I discussed this latest decision of Xerox and shared thoughts on some of the possibilities I imagine. Here’s a link to that episode: 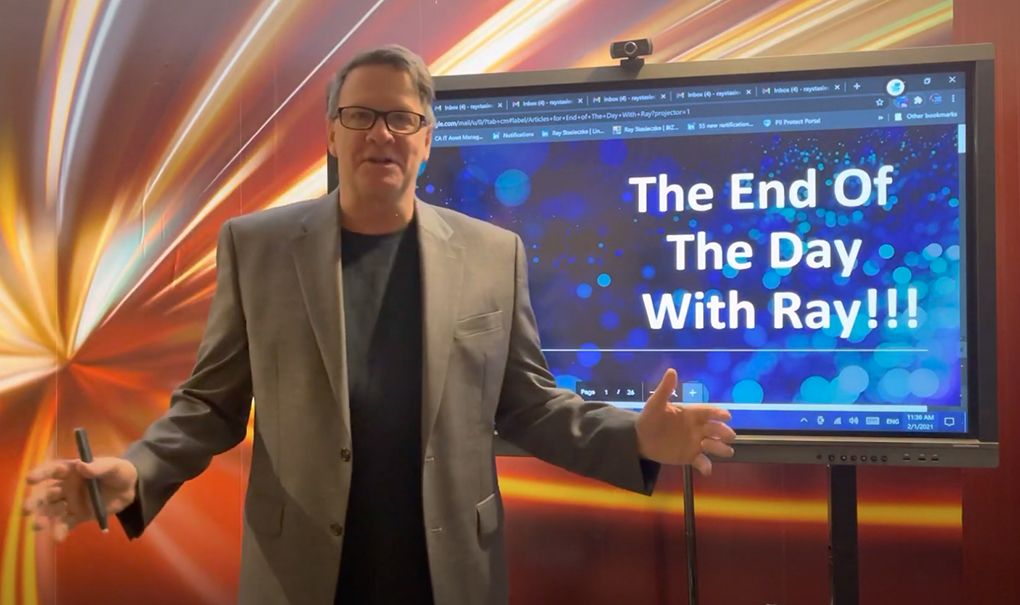 Now let me discuss Xerox Software business unit. The thing that stands out with this unit is the missing word services. One would assume that Xerox would highlight Service over Software. In my thinking, I see that decision as calculated. As the future gets closer to the present, the word software will be synonymous with service.

Software is the tool used for reaching the desired outcome, and as the world navigates more through that intersection, I describe between the physical and digital worlds, their service needs will arise, and be resolved in that intersection.

I am incredibly interested in the company Xerox purchased called CareAR. I imagine that CareAR and Xerox can accomplish what I envision as the first complex service center that will reside prominently in the intersection between the digital and physical worlds. Augmented reality merged with human capabilities will forever change the customer experience.

“Customer experience is determined in the intersection where products meet customers, and that intersection is increasingly becoming digital.”

I look forward to watching Xerox and CareAR as they proceed in the marketplace.

In the near future, Xerox will align itself with hardware manufacturers, as I suggested in 2019 when HP’s delusion became apparent. Xerox should align with Lexmark for A4, and continue growing their alliances with Lenovo for computing technologies.

Regarding A3. Over the last six or so months, I have suggested that Xerox forms a relationship with Konica as they once had with fuji. However, in this relationship, Konica should shed its direct distribution to Xerox as well. That consolidation would provide significant financial benefits to both organizations.

Although we must keep in mind, Xerox has positioned itself to offer all manufacturers a venue to distribute both products and services to end-users as a delivery and services business.

Xerox will go beyond print equipment in my vision, and in the future, the Xerox customer when saying call or I already called Xerox. The reason will be incomprehensible to those who today refuse to imagine the possibilities.

Have you found this article, “’Xerox: Between the Digital and Physical Worlds” helpful?

5 Quick Questions: Investing in Your Supply Chain Giving the Shirt Off Your Back for Quality Price and Ethics
Scroll to top