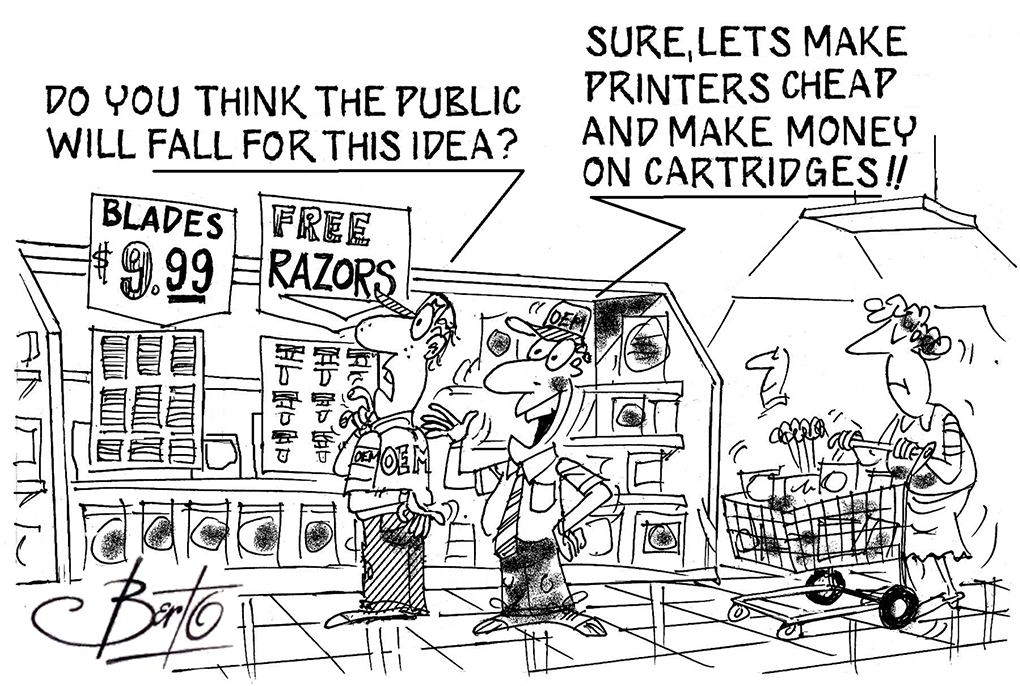 The printer and imaging supplies industry has relied on what is known as the “razor and blades” business model. This is where the “razor” is sold to users at a low price and the consumables, or razorblades” are sold at an inflated price because the end-user is committed to buying and using them, having the “razor” in hand.

RT Media’s resident cartoonist Berto has had some fun with this concept in this month’s cartoon.

According to Wikipedia, “the razor and blades business model is a business model in which one item is sold at a low price (or given away for free) in order to increase sales of a complementary good, such as consumable supplies.”

Although the concept and the catchphrase “Give ’em the razor; sell ’em the blades” are widely credited to King Camp Gillette, the inventor of the safety razor, Gillette did not in fact follow this model. Gillette razors were expensive when they were first introduced and the price only went down after his patents expired in the 1920s: it was his competitors who invented the razors-and-blades model.

Computer printer manufacturers have gone through extensive efforts to make sure that their printers are incompatible with lower cost after-market ink cartridges and refilled cartridges. This is because the printers are often sold at or below cost to generate sales of proprietary cartridges which will generate profits for the company over the life of the equipment.

In certain cases, the cost of replacing disposable ink or toner may even approach the cost of buying new equipment with included cartridges. Methods of vendor lock-in include designing the cartridges in a way that makes it possible to patent certain parts or aspects or invoking the Digital Millennium Copyright Act to prohibit reverse engineering by third-party ink manufacturers. Another method entails completely disabling the printer when a non-proprietary ink cartridge is placed into the machine, instead of merely issuing an ignorable message that a non-genuine (yet still fully functional) cartridge was installed.

In Lexmark Int’l v. Static Control Components, the United States Court of Appeals for the Sixth Circuit ruled that circumvention of Lexmark’s ink cartridge lock does not violate the DMCA.

In May 2017, aftermarket cartridge remanufacturer Impression Products had a historic win against Lexmark in the US Supreme Court. The ruling protects those who refurbish, repair or resell used products from copyright claims. It also reassures consumers of pricing options in the marketplace.