The Search for Qualified Distributors 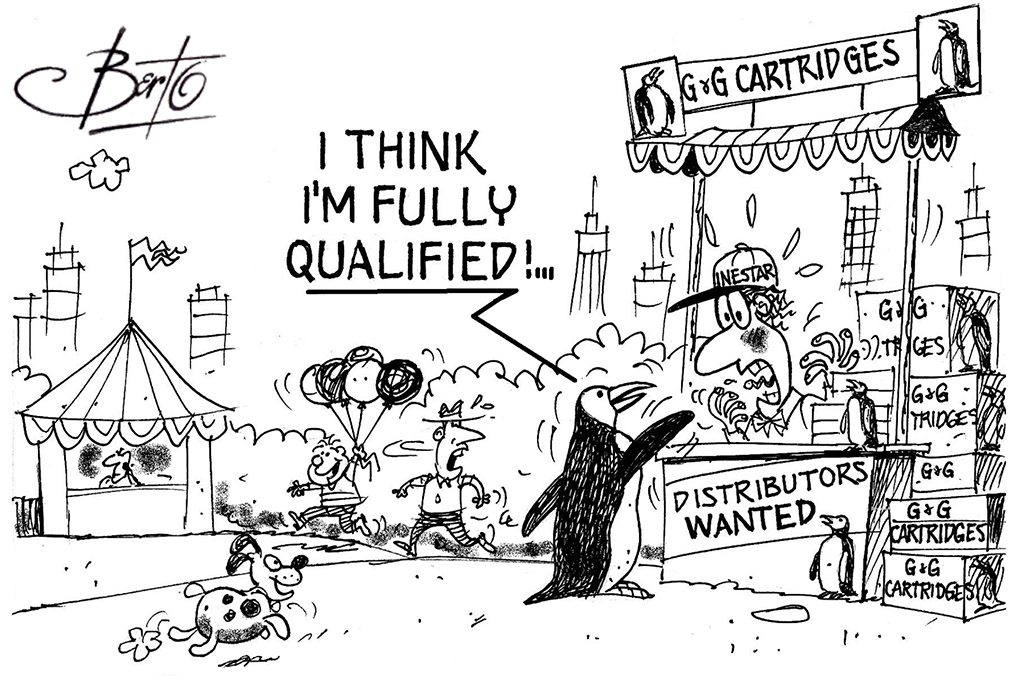 Penguins are a group of aquatic flightless birds. They live almost exclusively in the southern hemisphere and are highly adapted for life in the water. The emperor penguin is the tallest and heaviest of all living penguin species and is endemic to Antarctica. The male and female are similar in plumage and size, reaching 100 cm in length and weighing from 22 to 45 kg.

It’s no wonder Ninestar chose to use these elegant creatures as its company mascot back in 2000 when it commenced operations as a printer cartridge manufacturer, promising to help improve the environment with its remanufactured and reused printer cartridges.

Berto has used the Ninestar mascot in this cartoon in a cheeky, fun way as the emperor penguin fronts up to the Distributors Wanted exhibit claiming to be fully qualified.

Ninestar chose the emperor penguin as its company mascot because both are noted for the following characteristics:

Cartoon #101: The Search for Qualified Distributors

Berto’s previous cartoon #100: Nothing Fishy About This Dream Berto

HP Endorses Remanufacturing – are you paying attention?
Counterfeit Boom in the Middle East -Berto gives it a miss
Government Provides Incentives in World’s Fastest Economy
Remanufacturing the Customer’s Cartridges Instore
Printer Speeds Get Out of Hand – Berto is overwhelmed
Running Out of Ink is Horseplay – Berto Muses
0 replies

Sales: the Good the Bad and the Ugly Competition and Government Incentives Drive Growth
Scroll to top