I was fortunate enough to have a front-row seat at the debate of the year. The Aftermarket has become all bitter and twisted over the conflict between remanufactured cartridges and new-built cartridges.

Why? Because new-built cartridges, often referred to as NBCs, are capturing a lion’s share of the market previously enjoyed by remanufactured cartridges.

Actually, as the role of moderator for the debate, which was televised live as a Facebook event, I witnessed the very best the global industry had to offer on the arguments for and against. Six of the sharpest industry minds were all in one place at one time to provide their opinions on the topic.

U.S.-based Clover Imaging Group can take credit for bringing the debate out into the open. They are unquestionably the largest remanufacturer in the world with factories in Mexico, Vietnam, the U.S. and elsewhere. They issued a white paper in May declaring remanufactured cartridges to be the only legally-safe, quality solution for the Aftermarket. It was a position the new-built cartridge sector was never going to leave unchallenged.

Facing a shortage of supply of empty cartridges some years ago, the crafty Chinese looked for a workaround solution. Like they always do. It’s in the DNA of the Chinese to do so. In this case, they simply copied the OEM core, which is the missing ingredient necessary to build an NBC. These copycat cartridges became known as “clones.” Just like Dolly the sheep, they were identical in every way to the OEM original.  However, “clone” quickly became a derogatory term for these patent-infringing products that were unfairly disrupting the level playing field. 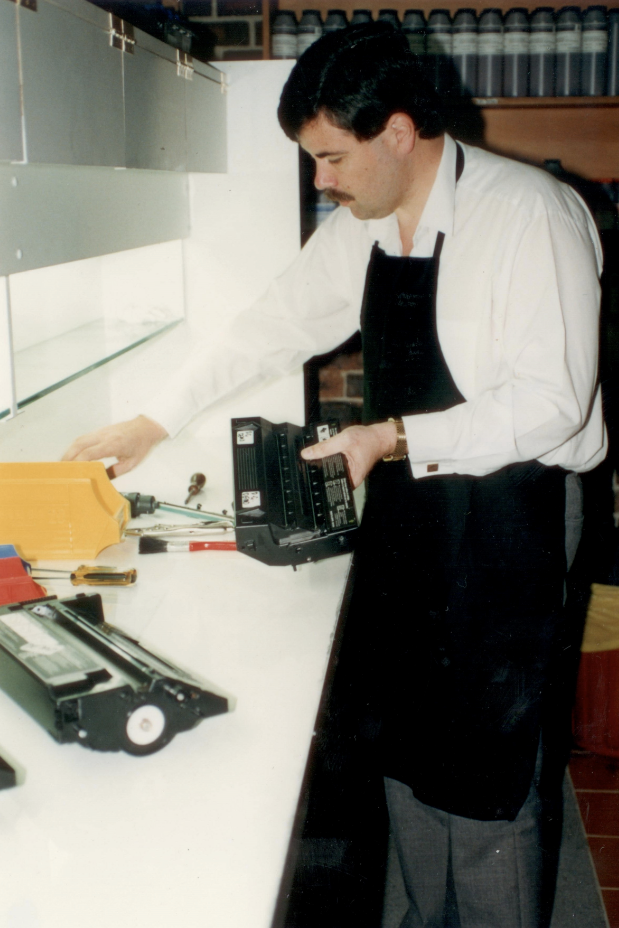 I was a remanufacturer myself back in the 1990s and owned my own business in Sydney, Australia (see photo). I was fully aware that the OEMs disliked the Aftermarket. They introduced “killer chips” and other technological or marketing impediments to thwart the Aftermarket as we captured more of their supplies market. Then they started to sue remanufacturers for infringing their intellectual property rights (IPRs) with limited success.  The right to repair protected the remanufacturers somewhat, but many settled with the OEMs anyway when confronted with onerous litigation.

The advent of the NBCs in recent years has caused the OEMs to scrutinize this new Aftermarket attempt to capture their market. However, NBC’s were capturing market share from the remanufacturers as well. Consequently, OEMs and remanufacturers have been recently positioned as strange bedfellows in an attempt to stave off this new NBC threat. Now, the OEMs have sued manufacturers and dealers of NBC’s alike for allegedly infringing their patents. The remanufacturers cheered them on.

Some debaters argued remanufacturing is the best solution for helping to conserve our planets’ resources. No one can argue with that, particularly given the manufacturers of NBCs are doing little to reuse or recycle their products. No one wants to argue against the environment.

Other debaters, however, claimed consumers are not driven to buy cartridges for environmental reasons. They simply favor a cheaper alternative to new, expensive OEM supplies. Price solely drives consumer choice, they argued. In terms of cartridge quality, some Chinese manufacturers are now delivering NBCs that can compete with OEM products. The market will ultimately determine the winners.

However, I have another view. The argument should not be about remanufactured vs. NBC products. To be… or not to be? This is NOT the question.

I met with industry leaders in 15 countries this year. In some places, the OEMs have registered patents, in other places they have not. Cartridge A may infringe IPRs in the USA, for example, but may not infringe in Russia. Not all markets are the same.

Cartridge remanufacturers were accused of infringing OEM IPRs for decades. Remanufacturers in the US, Europe and the UK were sued by Canon for simply snapping a dongle gear off a worn OPC drum and reusing it with a new OPC drum.

To Be Or Not to Be But that’s NOT the Question. Both sectors within the Aftermarket will be targets if they infringe OEM patents. The current tension is not really about products that infringe. It should be.

David Gibbons has been a school principal, a managing director of his own business, a director of communication for a large global organisation, a TV news host, a publisher of magazines and online content. He is currently a director of RT Media based in Zhuhai, China—a position he has held since 2011. He can be seen on the inTouch TV News broadcasts and interviews and is also the publisher of the RT ImagingWorld magazine for the global imaging supplies industry.

Read more from David Gibbons who can also be found on LinkedIn:

Please add your comments below about this blog, “To Be Or Not to Be But that’s NOT the Question”