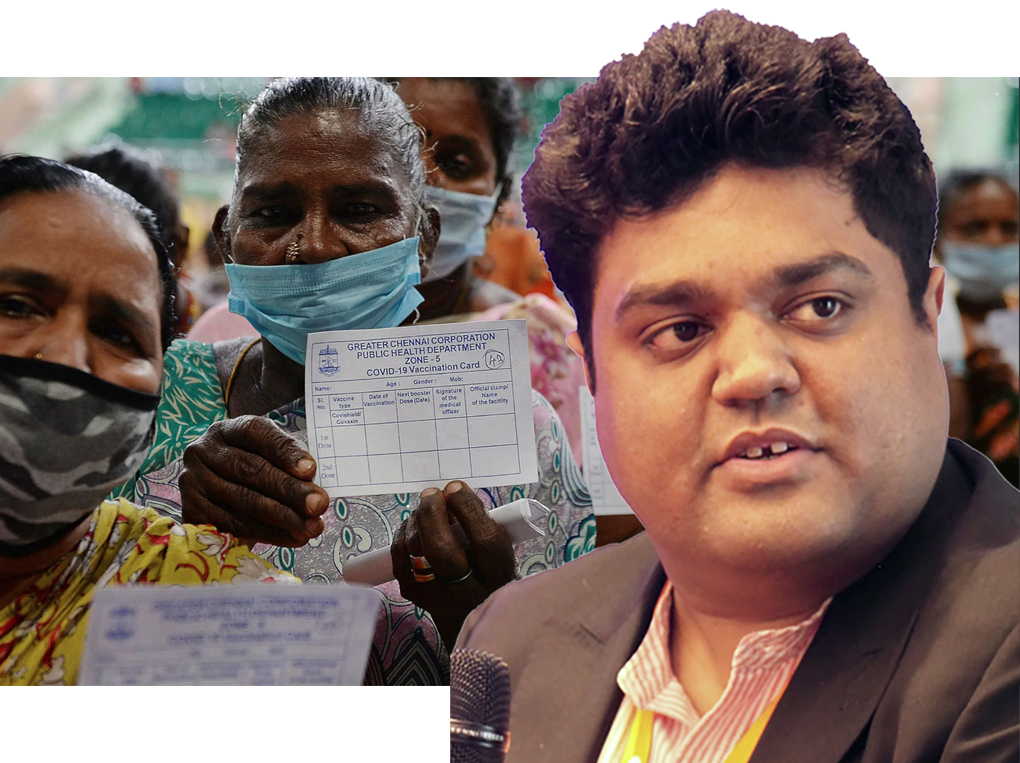 India Will Soon Bounce Back with a Vengeance

India seems to be collapsing and on the brink of anarchy. If you are to believe the media headlines around the world.

Western TV, social media, and the press are dominated by pictures of death and suffering and shortages and chaos across the country.

They say, or imply, it’s all caused by an incompetent Prime Minister who preferred winning elections and catering to his Hindu vote bank by allowing the once-in-twelve years Kumbh Mela to take place.

In my view, we the citizens of India are fully responsible for this massive second wave that has hit us like a tsumani.

As soon as the daily cases in India started declining, people stopped wearing masks when they left their homes. Such violations stem from ignorance surrounding the virus and how it spreads.

Arrogance and an ample dose of incompetence have combined to create the crisis in which we find ourselves. 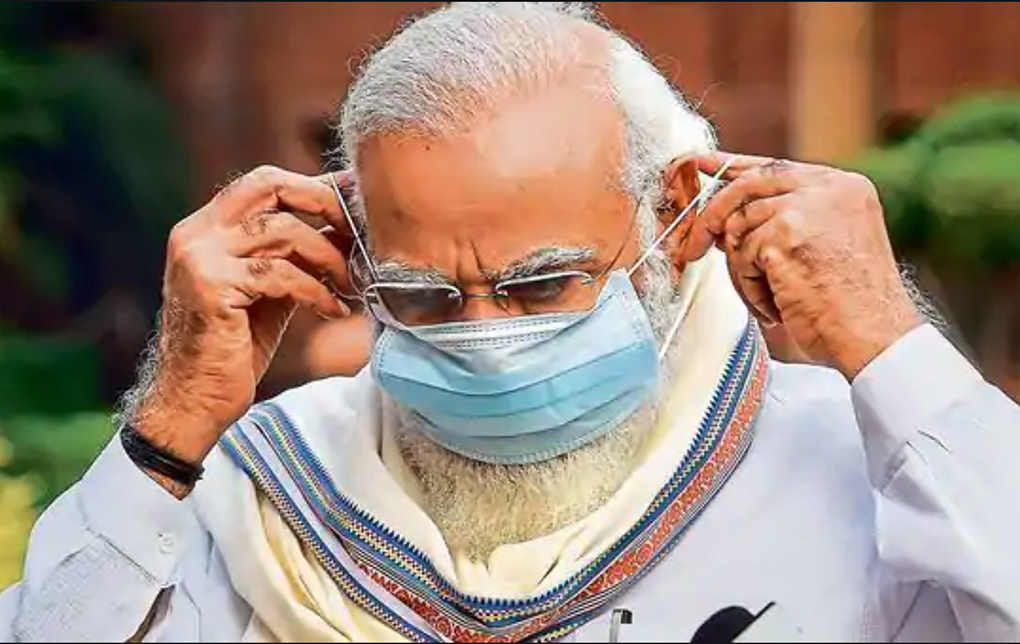 Indian Prime Minister Narendra Modi (pictured) has continued to caution citizens against “carelessness” since the easing of restrictions in 2020 “We have been careless. We were maintaining social distance and wearing masks when the lockdown was in place,” Modi said. “But today, when we need these things more than anything, we have not been following these protocols.”

My take is that leaders of some of the western powers are misleading the world by running down India to promote their own interests and boost exports, especially of vaccines and Covid related supplies. In so doing they hide their failures. 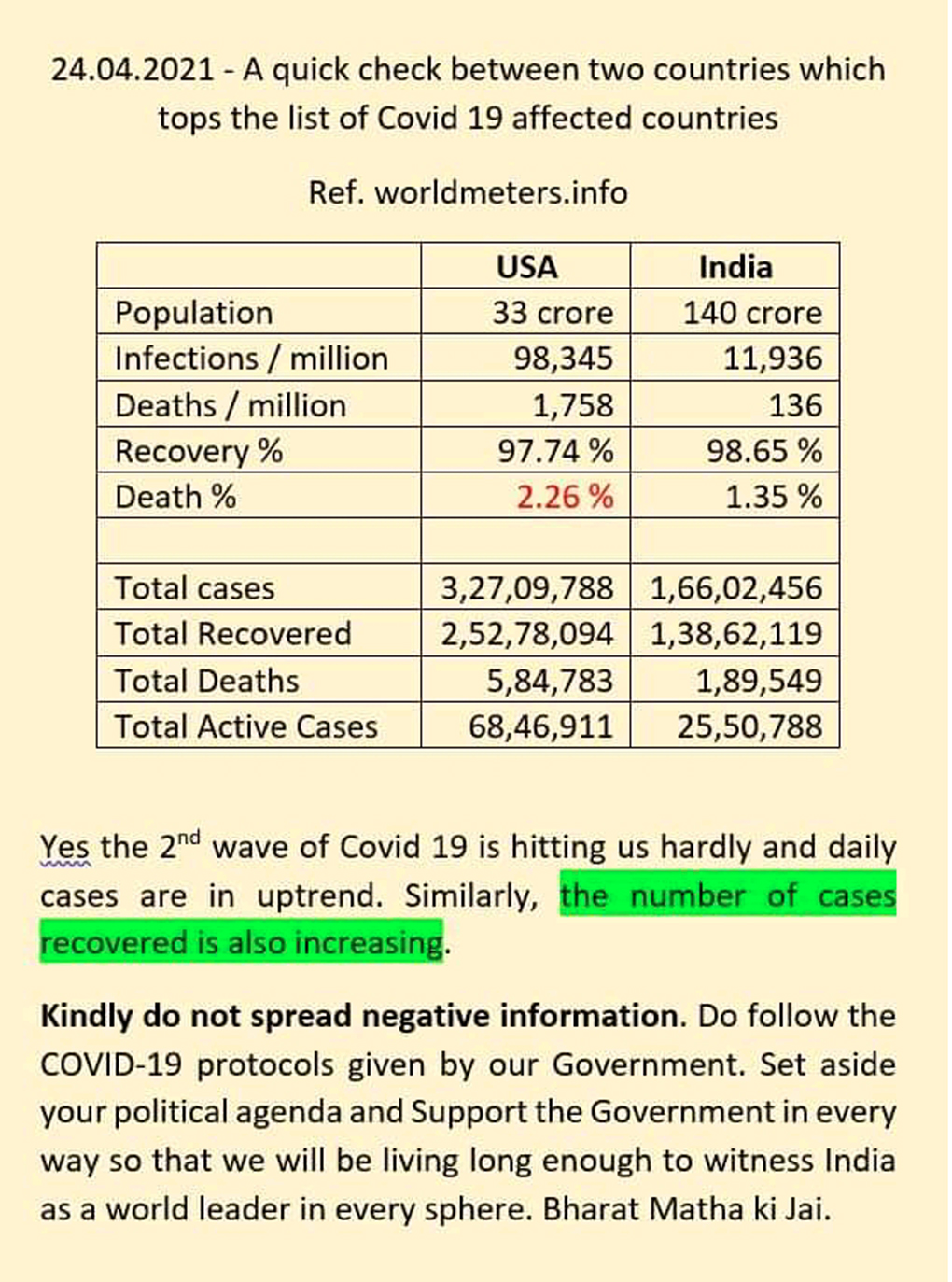 India by contrast has a population that is four times larger than the USA at 1.35 billion. It has 3.2 million active cases, 19 million cumulative cases and 210,000 deaths. Horrible? Yes, but considerably smaller than the USA. Look at the updated figures here.

I want to point out that India has done very well in many respects and is ranked second in terms of total tests done and third in the total number of vaccines administered.

In short, India has nothing to be ashamed of and plenty to be proud of despite the pandemic raging and causing difficulties and such terrible suffering. 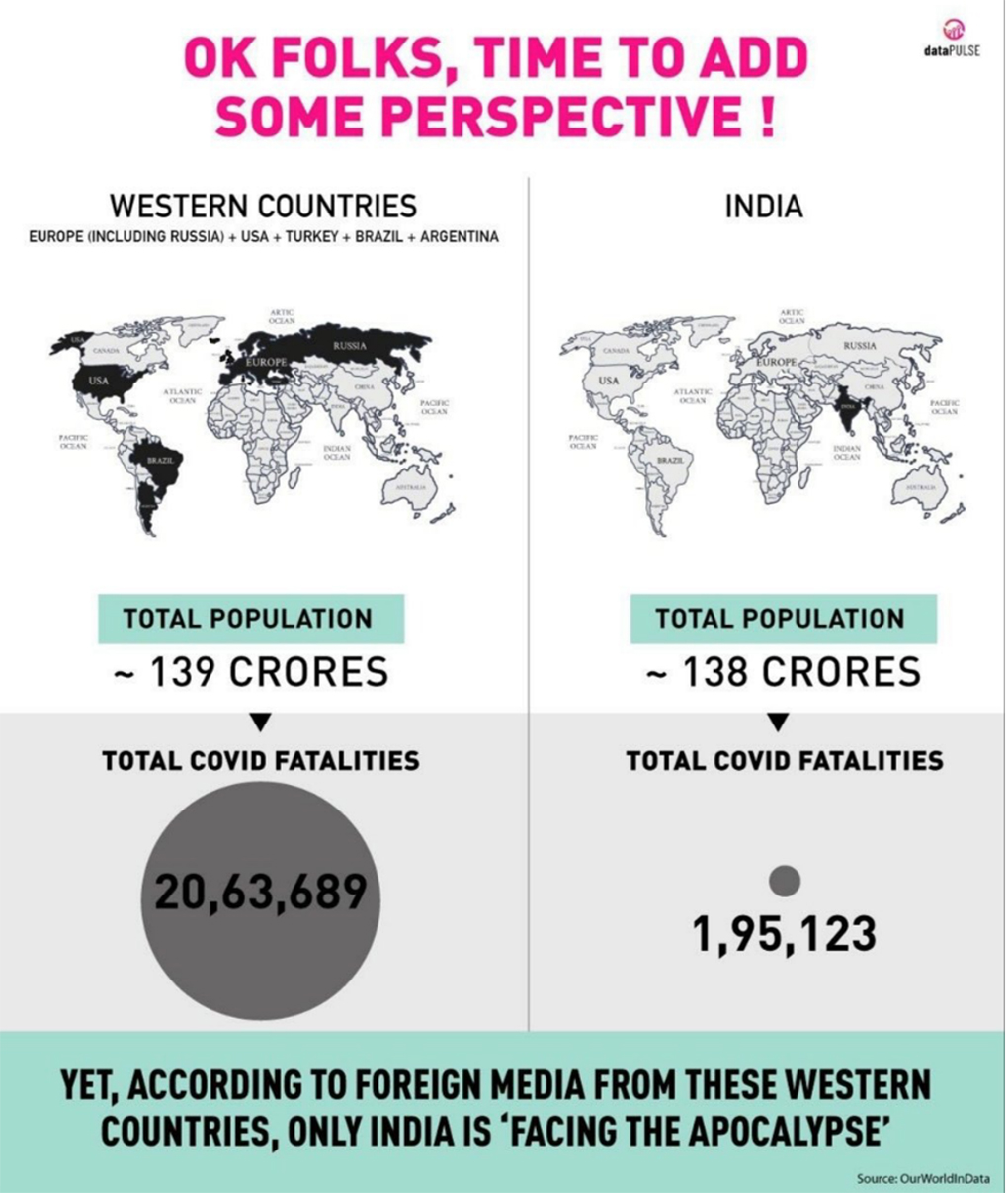 It is now expected the peak of the second wave will be over by the third week of May. In the last 24 hours, as I write, we are encouraged by the news that 167,457 people have completely recovered, 2,898,257 persons have been vaccinated and 1,639,357 samples tested with positivity declining and declining rapidly in Mumbai to below 9% and Delhi to 28% from high of 38% a few days ago. Medical Oxygen’s local production reaches phenomenal 7000 MT per day levels on May Day.

India is fighting back.

We will encourage all to look at the positive news as “India Successfully Fights Corona” which is factual rather than just believe the sensational headlines and macabre photographs of mass cremations dominating the western media and being peddled by vested interests, politicians, big pharma and even Indian opposition leaders and liberal intellectuals with an axe to grind against Prime Minister Modi who wins elections, much to their chagrin.

While the west still grapples with the Covid pandemic which has contracted their economies between eight and 10% in 2020, China has brought the pandemic under control and their economy grew in 2020. This fact has tarnished the reputation of most western leaders and their performance or non-performance will be called out in 2021 as China and India are projected to grow much faster than any western country.

Will this be the tipping point and signal the decline of the west?

These leaders, therefore, relish the stories about the tragedies of India and sell their citizens fake news of how well they have handled this crisis in their own countries.

Their bigger than life leaders have failed to save them from the coronavirus and all of them fall very short when compared to the successes achieved by China (and India by objective yardsticks).

They feed fiction to their citizens to make them believe they are very well off, unlike the poor Indians. I am many others, see this attempt to calm the raging anger across the USA and Europe—where these stories are being told. The stories, written by Indians based in New Delhi, are splashed across the front page of their newspapers. Sensational headlines and pictures create the impression the stories are based on on-the-spot reporting.

Let’s not forget Indian journalists are being paid thousands of dollars each to share the most garish article possible while sitting in the safety of their homes, often misusing dated images to paint a picture wanted in the west.

It is a cruel joke to think the US President or Canadian PM are on the side of the people of India. They won’t even release the raw materials necessary for Indians to have vaccines. The American pharmaceutical companies lost no time to successfully lobby the President to block raw materials required for manufacturing Covid vaccines in India. Their intent was to profit from selling the vaccine.

However, they underestimated the fortitude and business acumen of the Indian people. India has advised America that it is now manufacturing the Pfizer covid vaccine by an Indian company based in Mumbai. Even as India suffers its worst humanitarian crisis with the second wave of COVID-19, industry leaders in India have stepped up to meet the challenge. 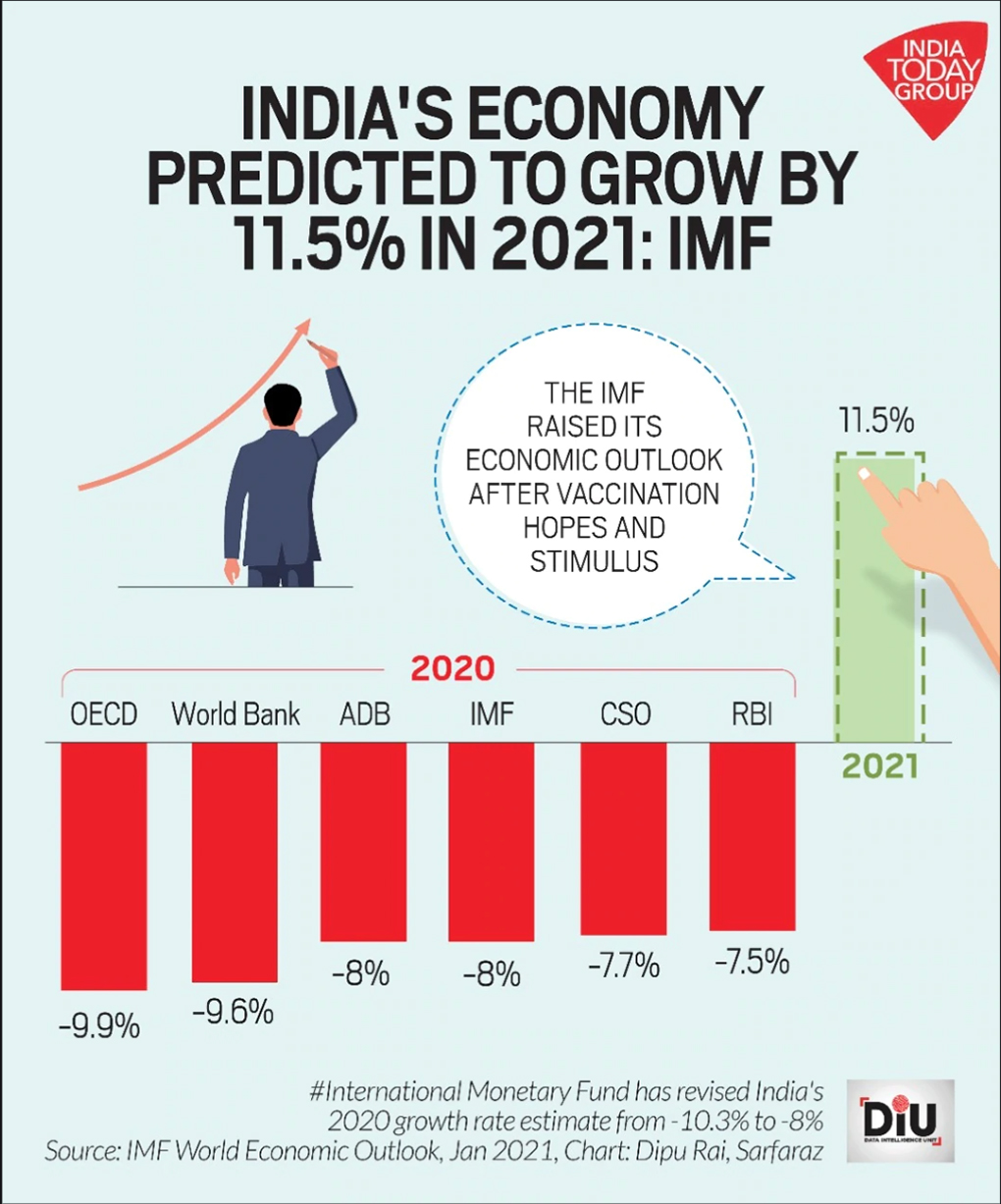 As a result, the economy is expected to grow between 10 and 12% despite the pandemic induced lockdowns as new COVID infections are expected to peak in mid-May 2021. Fortunately, the case fatality rate is still under 1.5% of infections compared with 3.5 to 4% worldwide.

The International Energy Association said in March 2021 there are two extremely positive developments that stand out about India’s energy system. “The first is India’s success in bringing electricity connections to hundreds of millions of its citizens in recent years. This is a monumental achievement that has improved the material well‐being of a huge number of people… The second encouraging development is the way in which India has grasped the transformative potential of renewables … solar in particular. As this report shows, the growth of India’s renewable energy sector has been highly impressive – and India is set to lead the world in areas like solar power and batteries in the coming decades.” 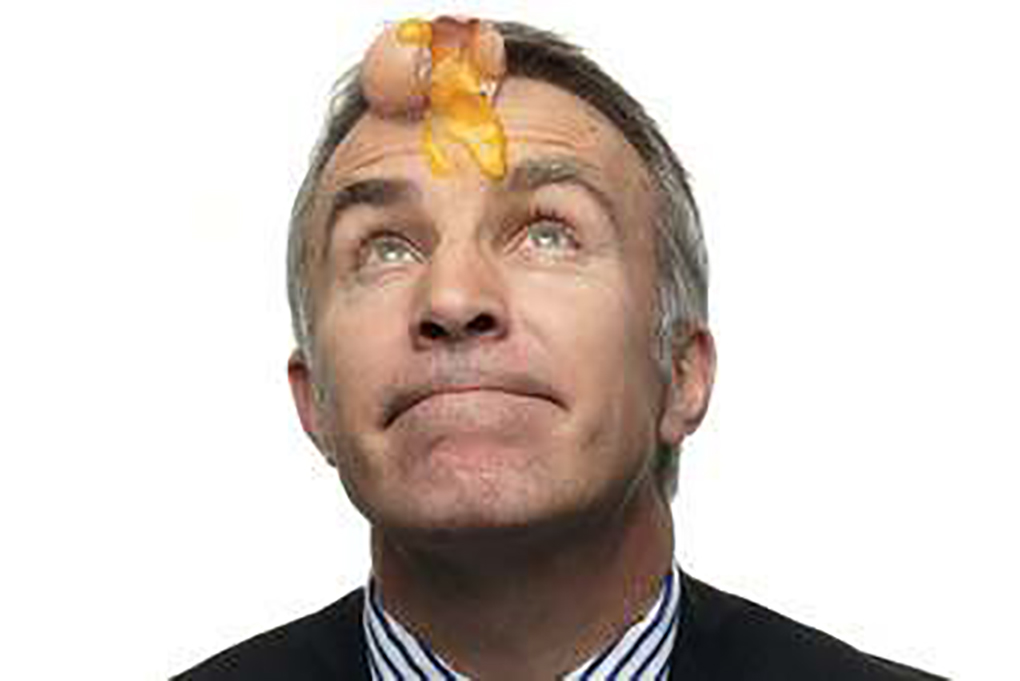 So, India is set to put egg on the faces of the many people in the west, including some of its leaders. It’s obvious that India can and will quickly win the war against Covid.

They should be supporting her efforts instead of putting obstacles in its path. Crowing about India facing an apocalypse and its leader is losing the plot is fake news and unhelpful.

All’s well that ends well and you will see India doing very well in 2021-22. India will soon bounce back with a vengeance.

What are your thoughts about Dhruv’s opinion, “India Will Soon Bounce Back with a Vengeance?”

Dhruv Mahajan is RT Imaging World’s Regional Partner for India. Based in New Delhi, he has been an international business development manager responsible for the past twelve years developing the aftermarket imaging supplies business throughout the Gulf and Southeast Asia regions.

Mahajan is the International Business Development Manager for OCT Imaging responsible for the Gulf and Southeast Asia regions. Mahajan is partnering with RT to bring VIP Expo one day intensive events to cities in India each year. The OCT Imaging factory in Zhuhai has manufactured printer cartridges and distributed Mitsubishi drums and toners since 2011.

Please add your comments below about this article, “India Will Soon Bounce Back with a Vengeance.”

National Day Holiday Might Save China
New Opportunity for Resellers to Increase Sales
Berto Dons a Face Mask to Beat Coronavirus and Toner Dust
Toner Ink News April 2020 –coronavirus, new devices and the environment
2017: There Will Never be Another One
‘Five Years From Now’ Showed Up Early
2 replies

Recycling Your Printer Cartridges – Berto Finds a Way Lead your Team like Genghis Khan: an 11-step guide
Scroll to top