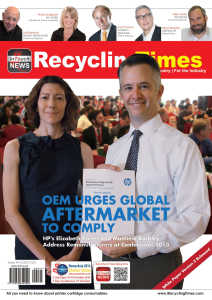 It was the first time any OEM had engaged first hand with the aftermarket industry on how to resolve differences over brand recognition and intellectual property. HP’s Elizabeth Porter and Matthew Barkley talked to more than 200 remanufacturers gathered from 40 countries, in Zhuhai China. They chose the RemaxWorld Conference in Zhuhai because it had a direct link to the global industry through the conference itself, the organiser’s multimedia news series, and the expo, which is the largest of its kind for the printing consumables industry. They said smart chips currently being used to remanufacture many of HPs cartridges, are sending messages to the printer that infringe HP’s intellectual property. They warned consumers are being misled when the message on the printer screen says “Genuine HP Installed” when an aftermarket cartridge is being used. It also infringes HP’s brand. HP insists remanufacturers must use smart chips in future that will display proper messaging. Porter and Barkley said manufacturers of smart chips need to change the value or information embedded to the trademark field on the chip. And remanufacturers need to make sure the chip manufacturers they buy their components from, are providing compliant products.

Brother also issued a white paper. These white papers are on file on this website.