You are here: Home /News/Aftermarket/Consumers Abandon HP Over Firmware Issues

The largest independent consumer body in the UK has found that Hewlett-Packard (HP) customers are unhappy with the printer manufacturer.

Which? reported some HP printers are designed to prevent customers from using third-party, aftermarket cartridges by employing so-called ‘dynamic security’. The firmware update to the printer recognises the third-party cartridges and stops them working.

According to Which?, many of the 9,000 consumers in its study say they are unhappy with the HP tactic and some have moved away from HP printers as a result.

The story has been picked up in the UK’s Daily Mail where it was reported, “The consumer group argues the HP system is wrong.” It cited Which? which said it should be up to customers to decide which cartridges and printer ink they want. The paper also referred to a lawsuit in the USA which resulted in some customers being reimbursed by HP for the costs of replacement cartridges, printers and repairs following a class action settlement. In the out-of-court deal, HP agreed that dynamic security would not be reactivated in the affected inkjet printers.

HP has denied that it did anything wrong. It said: ‘HP includes dynamic security to protect the quality of customer experience, protect HP’s intellectual property, and reduce counterfeiting of HP supplies and warranty fraud.”

The editor of Which? magazine, Harry Rose (pictured), said: “Printer ink shouldn’t cost the earth and there are lots of unbranded products that are just as good as their branded counterparts and a fraction of the cost.” He added, “Choosing third-party cartridges should be a personal choice and not dictated by the make of your printer.” Rose said it might be best to avoid HP if you “don’t want to fork out for expensive HP ink cartridges.”

More Expensive than Champagne, Chanel No 5 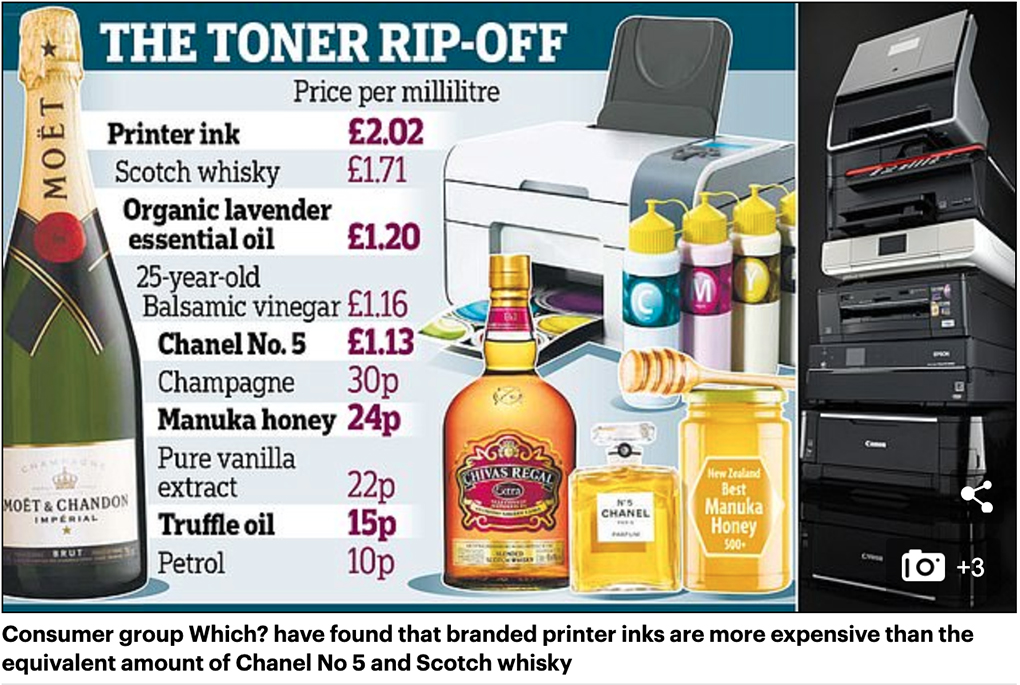 The Daily Mail story also reported on the cost of OEM inks and toners used in printers. The UK daily newspaper conducted a drop-for-drop price comparison and found OEM toner “is creating a dent in the finances of Britons who have moved their office to the kitchen table.” The news story cites the cost of an Epson branded cartridge worked out at £2.04 (US$2.63) for just one millilitre of ink which is seven times more than the 30p (US$0.39) for the equivalent amount of a Dom Perignon vintage champagne. “It is 80 per cent more than Chanel No 5, which is £1.13 (US$1.46) per millilitre. And it is around 20 per cent more than the £1.71 (US$2.21) for the same quantity of 32-year-old Convalmore single malt Scotch whisky.”

UK printing and office supplies businessman, Darren Turner moved quickly to let Britons know on social media there are third-party solutions available that will take care of struggling home and small businesses. “Our simple,low-cost, honest subscription package includes a printer, all the replacement cartridges you need and a lifetime warranty.” He added, “They’re very popular with families, home workers, the self-employed and micro-businesses.”

Please add your comments about this story, “Consumers Abandon HP Over Firmware Issues”, below.