Doing Business With China – Where is my egg roll? 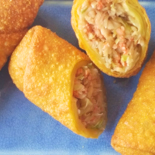 Doing business with China, particularly with printing supplies is probably not much different from ordering from your local US-based Chinese restaurant. If you ordered up big, you might score a few freebie egg rolls with the order. US distributors of printing consumables are wooed by the cheap prices from China and look for a bargain in their shipments.

For those not aware of it, an egg roll is a cylindrical, savoury roll with shredded cabbage, chopped pork, and other fillings and is usually eaten with the fingers, dipped in duck, soy sauce or plum sauce. They have become a ubiquitous feature of American Chinese cuisine and are often served as free additions to American Chinese combination platters throughout the United States and are closely related to, but distinct from, the spring rolls served in mainland China. A cultural history of Chinese food in the United States” has stated that the modern American egg roll was probably invented at a Chinese restaurant in New York City in the early 1930s.

“In my cartoons, I point out the foibles of the industry, but I am careful not to point the finger at particular individuals,” Berto says. “Often a cartoon helps us to stand back, to look at ourselves and laugh. A cartoon enables us to see ourselves as others see us,” he muses.

Think differently: what makes a good strategy
Is it a Blip or Everlasting?
Thankfully My Doctor Wrote a Prescription Not My Obituary
The Search for Qualified Distributors
Not All Toners Work As Berto Finds Out
The Challenges of Remanufacturing in China
0 replies

NEEDED: A Global Manufacturer to Set Up in India Managing Channels to Get Better Distribution
Scroll to top