You are here: Home /News/Aftermarket/Paperworld 2021 Postponed in Frankfurt

In a statement on September 21, 2020, Messe Frankfurt advised it would not be running its popular stationery event in January 2021 as planned.

This also impacts the Reman Expo pavilion which has focussed on printer supplies.

The statement read, “In view of the current situation caused by the Covid-19 pandemic and the associated international travel restrictions, we have decided to postpone Paperworld from the dates in January until 17 to 20 April 2021.

“We are fully aware that, for the majority of our customers, taking part in an international trade fair in 2021 is incredibly important because the trend-oriented order cycles of the consumer-goods sector require an annual event at the beginning of the year.

“Now, more than ever before, we consider ourselves obliged to cater to this need.

“Therefore, as a special exception, we will bring together Paperworld, Christmasworld and Ambiente under the heading International Consumer Goods Show – Special Edition from 17 to 20 April 2021. This physical event will be supplemented for the first time by the digital programme of the Consumer Goods Digital Days.

“We firmly believe that holding an event later in April 2021 will take the pressure off and are looking forward to working together with you on holding a successful and safe event.

It is not clear at this stage what will happen to the Reman Expo.

Many of the exhibitors in this pavilion are Chinese and they would not have been able to participate in January 2021 due to travel restrictions related to China and getting visas to visit Europe.

Chinese exhibitors are featured in many of the exhibits including paper, stationery as well as printer and copier supplies.

According to Statistica, 61 percent of countries in Asia have not opened up their borders to travellers, making it the most closed-off region for travellers in the world together with the Middle East, where 62 percent of countries are sticking to the closures. This is according to a report by the U.N. World Tourism Organization on COVID-19 travel restrictions released this month.

This also makes Asia the continent with some of the longest border closures of the pandemic. Out of 27 countries where borders have been completely closed for 30 weeks or more, 19 are in Asia.

By contrast, only 17 percent of destinations in Europe have not opened up, which applies to non-EU countries like Ukraine and Belarus as well as Hungary, which is the first Schengen country to have resealed its borders.

According to the report, complete border closures remained in place in 93 countries as of September 1, down from a high of 165 in mid-May. Most countries that eased restrictions were advanced economies and those with working hygiene concepts, according to the UNWTO. Dependence on tourism and how many cases a country experienced lately were less indicative of the easing of border restrictions. 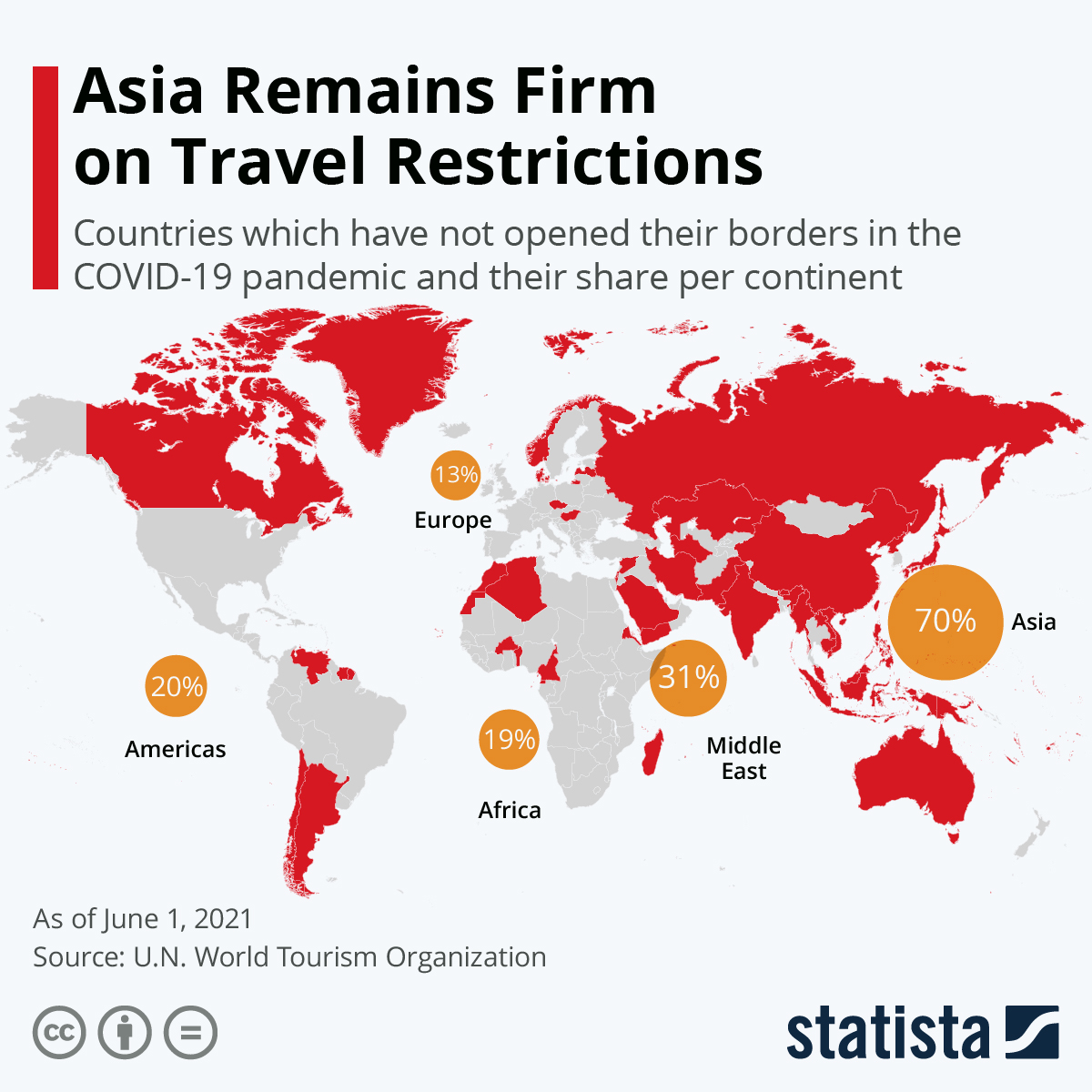 You will find more infographics at Statista

Please add your comments below about this story, “Paperworld 2021 Postponed in Frankfurt.”