China-based HYB reported to RT Media that its cartridge factory in Zhuhai reached its maximum production capacity in November, with 380000 pieces of copier empty cartridges produced, 320000 of which have been made into finished cartridges. 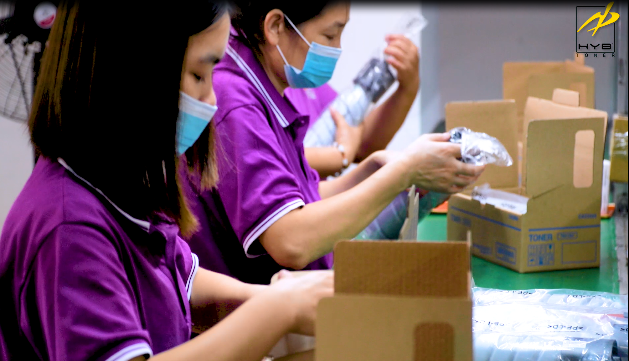 Chang emphasized the potential to increase productivity and enhance the capability to support HYB sales team to serve customers with prompt delivery time once orders are received.

Since the beginning of the 3rd quarter, HYB had been noticing that their customers have been resumed operation. “HYB responded quickly. We established business relation with more than 80 new importers since April of 2020. Along with that, our orders increased, “Chang added.

“Our engineering team has been busy with modifying some of the existing filling machines to enable the spare parts reach additional efficiency, “he said.

As Chinese New Year holiday is coming near, HYB suggests customers place orders 30 days in advance so that the team will be able to ship the cargos before new year holiday.

In December, HYB product range has been updated and added with new items for Ricoh, Xerox, Kyocera, Mita, Canon, Sindoh and Konica Minolta.

Please leave your comments to the story “HYB Reached Productivity Peak in November” below.