Ricoh Reports Growth in Q1 and Ray Calls for Relevance 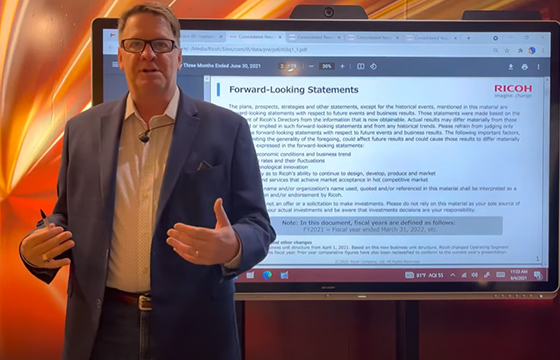 According to Ricoh, sales increased by 20.6% to ¥424.8 billion (US$3.88 billion) in the first quarter ended June 30, compared to the previous corresponding period.

Some other highlights include:

Ricoh claims that its business activities have recovered in a number of other businesses, including the commercial printing business and the industrial printing business. “In line with the introduction of the business unit structure, the new business segment adopted in fiscal 2021, namely Digital Services, Digital Products, Graphic Communications, and Industrial Solutions, posted a significant increase in revenues,” said the spokesman of the company.

Ricoh aims to become a digital service company, a work productivity innovator, over the two years of the 20th Mid-Term Management Plan, which started in fiscal 2021.

In his TV program the End of the Day with Ray, Ray Stasieczko commented on the results and urged that it’s time to challenge all status quo and fight for relevance.

“You can’t run around with a 1% or 2% operating margin. In a declining marketplace, you don’t have any money left. You can’t just keep moving your business bottles around and moving money from one place to the other place, so you look good on paper. You got to really have a strategy, you got to be able to go into the marketplace that you know is declining.”