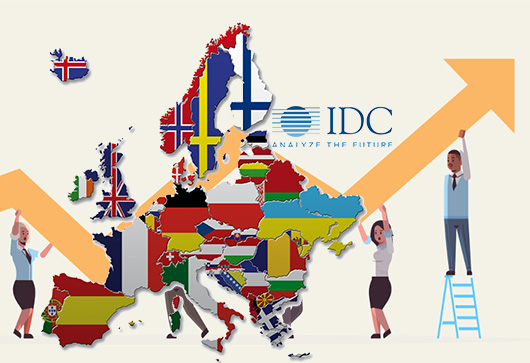 According to research by International Data Corporation (IDC), the Western European printer and multifunction (MFP) market unsurprisingly increased by 12.9% in unit terms in the third quarter in 2020 (Q3, 2020), compared with the same period a year ago to give a market size of 5.19 million units, but market values (in euros) contracted by 9.6%.

The growth was driven by the demand for low-end cost-effective inkjet and monochrome laser devices for home working and home education even as lockdowns were relaxed in certain industries but most still had the majority of their workforces working from home or in satellite offices. Tens of millions of workers are still working from home as opposed to the office going into 4Q20m, and even though schools and universities opened up towards the end of 3Q20 the current crisis means the need for home printing and scanning will continue throughout 2020 and into 2021.

Some suppliers struggled to meet demand for hardware and supplies while others saw considerable success as channel partners bulk purchased to satisfy end-user demand from individuals and enterprises. Demand for higher speed A4 and A3 devices was mixed at the start of 3Q20 as lockdowns were still in effect and the return to work varied considerably across countries. This simply meant that as offices and other sites could not be opened to the general workforce it became difficult to complete installations. This scenario began to change towards the end of 3Q20 as more workspaces opened and some of the major suppliers took advantage and began to fulfill their renewals and contracts. Others continued to suffer as their portfolios didn’t match the working from home scenario or did not have the channels to service demand.

“Demand for low-end devices seen in 2Q20 continued even stronger into 3Q20,” said Phil Sargeant, program director in IDC’s Western European Imaging, Hardware Devices, and Document Solutions group. “The need for home working and home education is very much in evidence and devices being purchased for home usage are likely to remain there as many businesses are now implementing practices for allowing more workers to work from home either partially or permanently.”

Laser shipments also increased 2.7% for the quarter, with A4 monochrome MFPs driving growth and increasing 31.7% and A4 monochrome printers remaining flat.

Countries had mixed results, and although most did record a decline there were some surprises as some showed a solid performance and recorded increased shipments. The main country highlights are detailed below:

The German market declined 3.8% in 3Q20. Inkjet shipments remained flat while laser shipments declined 4.4%. Germany had one of the softer lockdowns in Europe and many workers continued to work from the office, but the demand for business inkjets increased and consumer inkjets were slightly down. As with other countries, demand for A4 monochrome MFP devices increased, A4 color shipments were weak, but A3 color MFP shipments were only slightly down.

France shipments surged 13.0%, with particularly strong growth of 15.9% in the inkjet market following on from growth in 2Q20. This was due to large growth from consumer inkjet devices and marginal growth from business inkjets. Laser shipments increased by single digits but in line with Western Europe the growth was derived from A4 monochrome MFPs with A4 printer shipments also strong. Color A3 MFP shipments declined slightly but were in line with other countries.

The U.K. performed well in 3Q20, increasing 13.6% year on year with the main growth from the inkjet markets at 17.5% driven by strong growth from both consumer and business inkjet markets as demand for home working and home schooling continued. Laser shipments decreased slightly, but overall A4 monochrome MFP shipments increased by two-thirds and A4 monochrome printers by almost a quarter. Color shipments were weaker and A3 MFP shipments declined by a half.

Italy increased by a third compared to a year ago. Consumer inkjets performed very well, increasing by more than half, but business inkjet shipments struggled and declined by a quarter. Laser shipments also increased strongly with growth from A4 monochrome printers and MFP and A4 color printers and MFPs, but A3 shipments remained weaker as the various lockdowns prevented installations in many cases.