The inkjet printers’ segment declined YoY by 11.9% due to the low stock availability of ink cartridge printers. From a QoQ perspective, the segment however grew by 21.8%, primarily by HP’s delayed Q2 shipment spilling over into Q3. Additionally, with schools and colleges being forced to continue the virtual classes, demand from parents and students remained strong in Q3.

The laser printers’ segment (including copiers) recorded a marginal YoY decline of 1.8%. The laser copier segment, however, observed a YoY growth of 15.1%. With the markets opening further, the demand from the government picked up following an increase in the number of new projects and execution of those that were previously on hold. The corporate sector, too, observed a surge in demand for laser copiers as they began resuming operations from offices in a phased manner.

“In the inkjet printer segment, while the shipment of single-function printers declined, that of the multi-function printers grew at 25.2% YoY. This growth came primarily at the back of ink tank printers and more specifically from the $200 – $300 category of printers. Because of its price point and added functionalities, there is a growing preference for multi-function ink tank printers over laser A4 printers in offices where these printers are typically deployed in the cabins of senior-level management. Most of the demand was met by HP and it could have been higher had it not been for the stock crunch that Epson and Canon faced in Q3,” says Bani Johri, Market Analyst, IPDS, IDC India. 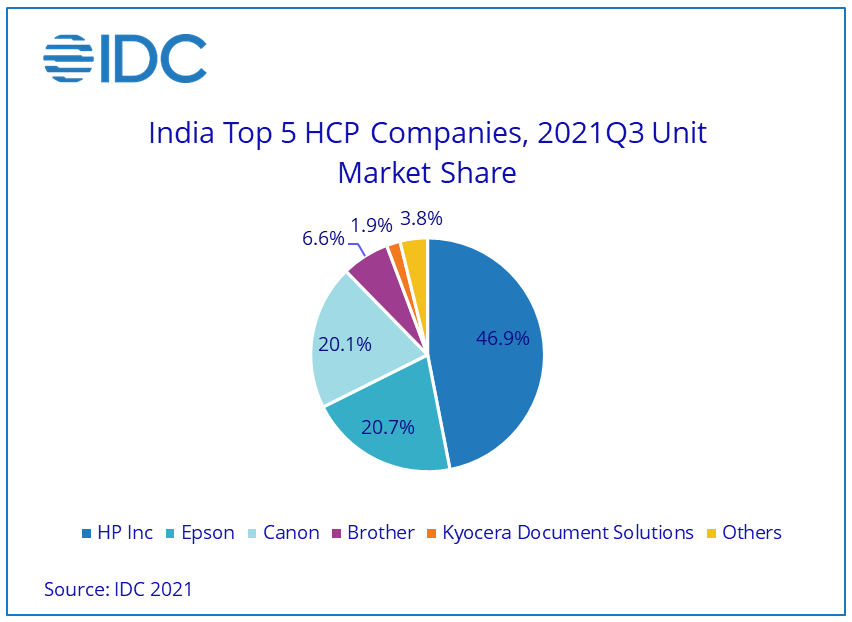 HP Inc. (excluding Samsung) maintained its leadership in the overall HCP market with a share of 46.9% and a YoY growth in shipment of 2.3%. The growth was led by the inkjet printer segment, wherein HP grew by 9.1% YoY, increasing its market share from the last few quarters to 46.3%, thus replacing Epson to become occupy the 1st position in the inkjet printer segment. The growth came at the back of its ink tank portfolio which grew by 53.5% YoY coupled with the launch of new models in Q3. In the laser A4 printer-based segment HP declined by 6.6% YoY as it struggled with product availability.

Epson occupied the 2nd position in the overall HCP market with a market share of 20.7% while registering a YoY decline of 9.4% because of the challenges it faced at the production end. In the inkjet segment, it occupied the 2nd position in the market with a share of 32.0%. Epson was particularly impacted in the ink tank multi-function printer category.

Canon recorded a YoY decline of 25.4% and occupied 3rd position in the overall India HCP market, capturing a unit market share of 20.1%. In the inkjet segment, Canon observed a YoY decline of 43.2% as it struggled with the stock availability of certain ink cartridge models. In the laser segment (including laser copiers) Canon maintained its 2nd position with a market share of 24.8% while growing YoY by 12.0%. In the laser copier segment, Canon grew by 37.7% YoY and continued to lead the copier segment with a 35.1% market share.