You are here: Home /News/Aftermarket/How the EU Plastic Waste Ban Could Turn the U.S. into a Next-Generation Recycling Destination

How the EU Plastic Waste Ban Could Turn the U.S. into a Next-Generation Recycling Destination

This article is published at triplepundit.com by Tina Casey 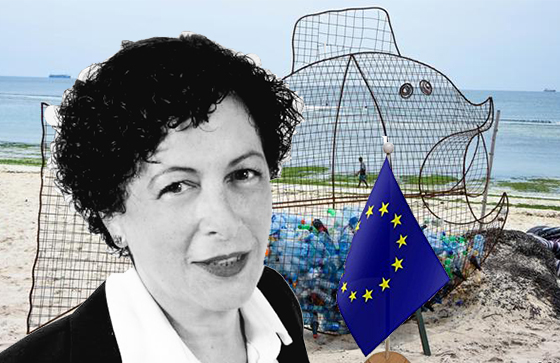 Next-generation plastic recycling technologies could breathe new life into the U.S. petrochemical industry, and not a moment too soon. The global recycling market has been cracking under the strain of plastic waste, and export rules are tightening. In the latest development, the European Union announced a new export ban at the end of last month, one that could have an impact on U.S. markets.

China touched off a crisis in the global recycling market in 2018 when it banned certain types of waste imports. The move exposed glaring shortfalls in the traditional approach to recycling.

In conventional recycling, the onus is on global markets to propel the demand for products made with recycled plastic. That has succeeded to some extent, but it is clearly not a permanent solution to plastic waste.

Here in the U.S., plastic recycling rates are generally low to begin with, and evidence is mounting that sending waste overseas simply shifts the burden from developed economies onto others that are ill-equipped to handle mountains of waste. The result is that waste ostensibly intended for recycling is mishandled, ends up in landfills or incinerators, or is dumped illegally.

A sea change for plastic waste

China’s ban touched off a wave of activity around the issue of plastic waste by other nations and international organizations.

Although the United Nations estimates that only 2 percent of plastic waste is exported, the ripple effect was significant. Without the benefit of China’s more sophisticated recycling infrastructure, the waste stream has surged into countries that are not necessarily equipped to handle it.

Major new markets have included Thailand, Malaysia, Vietnam, India, Turkey, and several members of the international Organization for Economic Cooperation and Development (OECD), including the U.S., Korea, Canada and members of the EU.

One significant development occurred in November when OECD announced an agreement on new rules for exporting certain types of plastic waste. The new agreement only covers the category of hazardous plastic waste intended for recycling, as an update to the 1989 Basel Convention covering the shipping of hazardous waste. However, it is a step in the right direction.

Under the updated rules, all 37 OECD member countries that export hazardous plastic waste for recycling must now receive prior consent from the destination country.

The OECD timeline also calls for members to review the rules for non-hazardous plastic waste in 2024. In the meantime, organizations fighting this surge of waste can expect greater access to information from OECD members.

As part of the new agreement, the members have committed to publicizing lists of their regulations for exporting non-hazardous plastic waste. That includes single-source or “pure” polymer waste where little or no by-products are left for disposal, as well as mixed plastic waste that is more challenging to process.

Another significant step occurred on Dec. 22 when the European Commission announced new regulations for importing and exporting plastic waste.

The EU’s new export regulations have an environmental justice angle in that they will help prevent the indiscriminate export of unsorted plastic waste to countries that may not be equipped to recycle it.

Under the new rules, EU countries will no longer export many types of plastic waste to non-OECD members. The only permitted waste is “clean plastic” intended for recycling. The Commission also announced stricter regulations for exporting plastic waste to OECD members outside of the EU, and for importing waste into the EU.

In a statement announcing the new rules, Virginijus Sinkevičius, EU Commissioner for environment, oceans and fisheries, made a strong case for regulation of the global plastics market.

“These new rules send a clear message that in the EU we are taking responsibility for the waste we generate. The export of plastic waste will only be allowed under very strict conditions,” he explained. “The export of unsorted plastic waste to non-OECD countries will be completely banned. This is an important milestone in fighting plastic pollution, transitioning to a circular economy, and achieving the aims of the European Green Deal.”

Meanwhile, over here in the U.S.

The ripple effect of the new EU regulations is all but certain to affect recycling markets in the U.S.

Plastic scrap exported from the U.S. dipped sharply after the China ban, and the COVID-19 crisis has placed new burdens on these waste streams. Domestically, the U.S. already makes an excessive contribution to plastic pollution along its coasts. The risk of bursting at the seams will become greater without a reliable export market — unless domestic recyclers step up their efforts.

Recycling is clearly not the only solution to plastic waste over the long run, but until the global economy de-plasticizes, it can make a stronger imprint on the plastic pollution problem.

New, next-generation forms of recycling could help make a difference. Among the solutions to emerge are bio-based, microbial and molecular-level technologies that break plastic down into chemical building blocks, rather than simply shredding or melting it. Another emerging approach involves pulverizing plastic waste to produce hydrogen gas and carbon nanotubes.

The aim is to develop more efficient recycling streams while also producing a high-performance material that is equal to, if not better than, virgin plastic.

All of this could work to the advantage of petrochemical stakeholders in the U.S. If they were so inclined, they could pivot their know-how, infrastructure, and supply chains into next-generation recycling technology rather than relying on raw natural gas and petroleum for feedstock.

Though the U.S. is most closely associated with plastic waste exports, it actually does import a significant amount of plastic. With new technologies in hand, the domestic petrochemical industry could build on that foundation to increase the role of the U.S. in the global market for plastic recycling, giving the country a leading role in the global marketplace.

They had better act fast. COVID-19 pandemic or not, the long-term market for virgin plastic already shows signs of weakening as the movement for reduced packaging heats up among leading consumer goods manufacturers. The package-free movement is also gathering steam, and the next generation of bio-based plastics offers yet another challenge to the oil and gas supply chain.

Please leave your comments to the story “How the EU Plastic Waste Ban Could Turn the U.S. into a Next-Generation Recycling Destination” below.