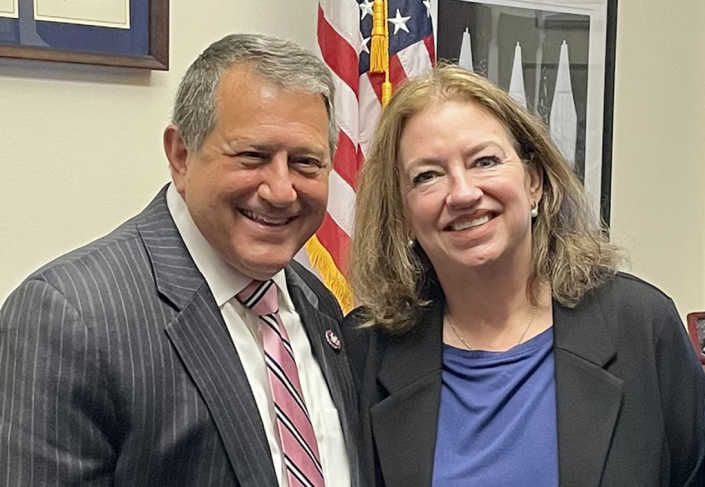 The deadline to comment was September 28, and many important people submitted comments. Chief among them was U.S. Congressman from New York and industry champion Joe Morelle.  “I am a strong advocate for the federal government adopting sustainable policies and practices and doing our part to combat climate change to protect future generations,” Morelle wrote.

“Reduction of single-use plastics is a strong step in solving this complex issue. I strongly encourage the GSA to look to remanufactured products as a solution and an alternative to purchasing single-use plastics.” (Congressmen Joe Morelle is pictured above with Int’l ITC’s Executive Director Tricia Judge).

“Plastic pollution is one of the gravest environmental threats of our time,” the members wrote. “As the single largest purchaser of goods across the world, the U.S. government has an important opportunity to do the right thing and lead by example. Not only is such a move necessary in light of the climate crisis and environmental justice concerns, a plan to phase out single-use plastics in federal procurement policies also opens the door for a growing community of sustainable product enterprises and a socially and environmentally responsible economy.”  The full letter and list of congressmen can be viewed here.

The Int’l ITC submitted its own letter, as did several of its members.  Chief among them were American Laser Products, Clover Imaging, Green Planet, Photikon, Laser Save and Bendix Imaging.  The GSA will review these letters and then, hopefully, take the next steps towards removing these wasteful products from its bids.

Watch the Int’l ITC website for more information on this and other legislation of importance to the imaging supplies community ().

Please leave your comments below for the story “GSA to Stop Single-Use Plastic Purchases.”

Cartridge World Awarded ‘Most Affordable Franchise to Own in 2022’ How Possible is it to Enter China to Visit RemaxWorld Expo?
Scroll to top