Recently it is reported by HYB distributor in Brazil that there are counterfeiting products in the market and the local distributor claimed to have the source to get Zeus Toner ® from the manufacturer in China. This is the 2nd case that fraud toner of HYB trademarks being sold in the market after the case happened in Colombia. 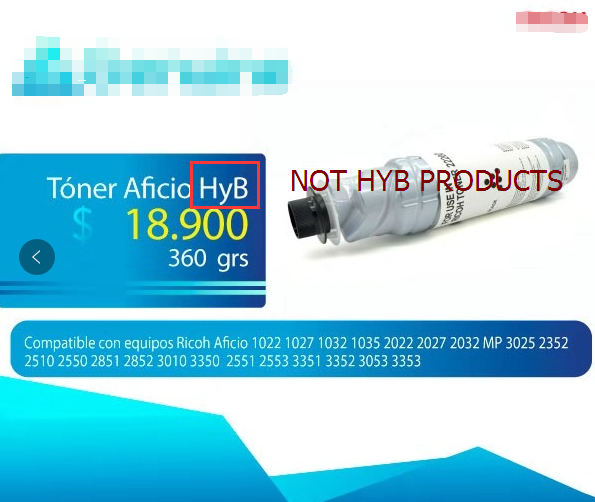 HYB is the sole owner of the trademark Zeus Toner ® ( ZEUS powerful toner ™) in more than 46 countries including Brazil and the efforts and investment we have devoted to our trademarks doesn’t allow any manufacturers, distributors to make a “SHORT CUT” to enjoy the marketing impact and reputation we have built together with our distributors.

HYB has the right to set up their sales channel and authorization of distributors. Any other manufacturer claimed to be the manufacturer or used the registered packing patents, logos, slogans, and bar codes will be violating the Intellectual Property right of HYB.

Here we would like to announce that DUCOPRINT Duplicators Copiers & Printers Co., Limited (Hereinafter called as DUCOPRINT) in Brazil Is the exclusive distributor of Zeus Toner ® in this region. Any other channels or sales company who claimed to be distributing Zeus Toner ® ( ZEUS powerful toner ™) imported from us or any non-brand owner producers are high suspected to be a fraud products reseller and HYB won’t cover the warranty of such products.

Last year, HYB also reported noticing some fake “HYB TONER” launched in Columbian market from unknown channels, which were sold at an extremely low price.In response, HYB clarifies that ALHUM LTDA. is the only authorized distributor in Colombia for HYB ® Toner ® and Zeus toner ®. Any other parties who try to sell products under these two trade marks (legally belonged to HYB Group) have to show their legal purchase from ALHUM LTDA. Otherwsie, HYB reserves the right to sue those who sell the products without proving their official resourcing.