You are here: Home /News/Aftermarket/The Right to Repair Calls for Regulatory Action

The Right to Repair Calls for Regulatory Action 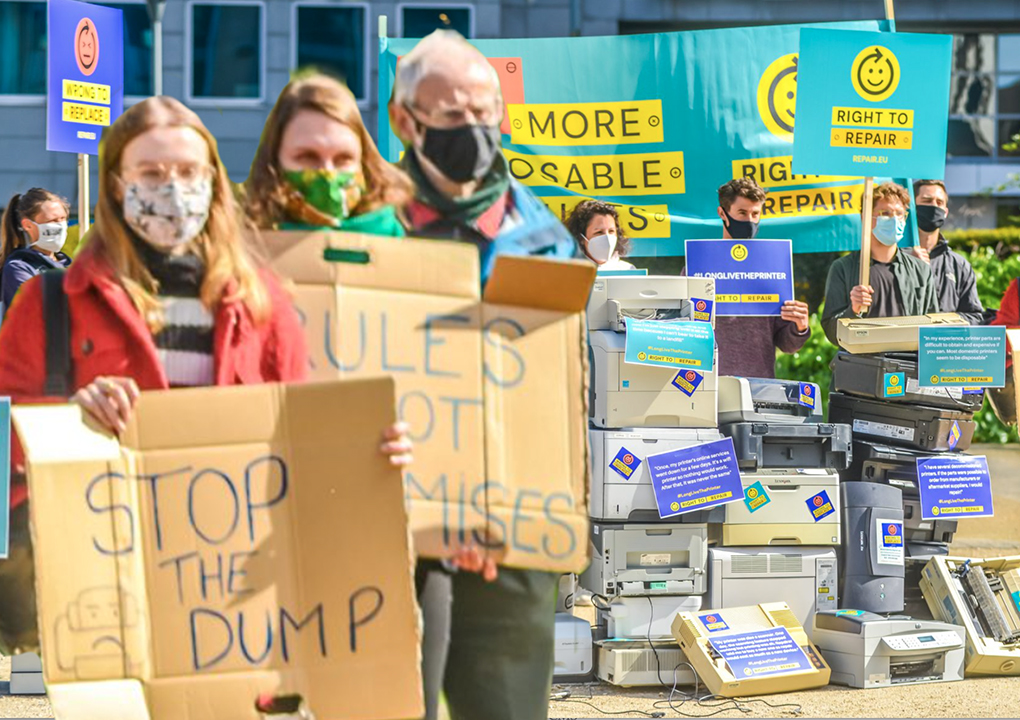 Protesters from The Right to Repair campaign piled up broken printers in front of the European Commission in Brussels, calling for regulatory actions.

According to repair.eu, the #LongLiveThePrinter action was attended by representatives and members of the Right to Repair campaign as well as four Green MEPs who want ambitious measures to make sure people can have longer-lasting and more repairable printers.

Back in March 2020, the European Commission adopted the Circular Economy Action Plan and set out to address the entire life cycle of products and tackle their premature obsolescence notably by promoting the right to repair for Information and communications technology (ICT) products.

In addition to mobile phones, laptops and tablets, the Commission had rightfully identified printers as a particularly wasteful product and committed to tackling them by means of a dedicated regulatory instrument “unless the sector reaches an ambitious voluntary agreement” by September 2020.

However, nearly one year past, the discussions on the voluntary agreement have not yielded any tangible results.

“We are therefore calling on the Commission to reject the voluntary agreement and to start working immediately on mandatory requirements addressing both the durability and repairability of printers as well as the reusability of cartridges,” so says a representative for the Right to Repair campaign.

Printers are one of the most iconic examples of premature obsolescence and some of the least repairable products brought to community repair events. According to data from the Open Repair Alliance, only 37% of printers get repaired at events, while 33% are deemed end of life.

Meanwhile, printer cartridges are a major source of uncontrolled proliferation of electronic waste in the EU. 100,000 tonnes of e-waste are created each year in the EU due to limited reuse and remanufacturing of cartridges, suggests an analysis of the data from a report for the European Commission in 2019.

About Right to Repair

The Right to Repair campaign was launched in September 2019, and since then quickly grew to over 40 organisations active around the cause of repair from more than 16 European countries.

The campaign members represent community repair groups, environmental activists, social economy actors, self-repair advocates and any citizen who would like to obtain their right to repair.