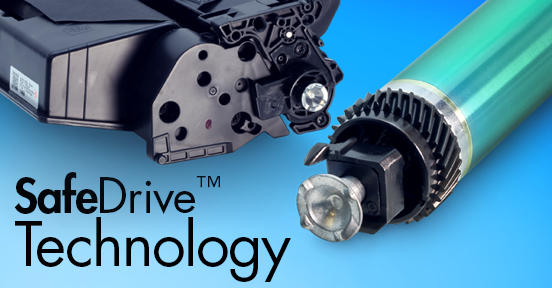 On February 28, Administrative Law Judge Dee Lord ordered that certain patent claims made by Canon regarding its dongle gears must be more narrowly construed.  As a result, Static Control claims its dongle gear solution for CF226A/X, CE505A/X, CF280A/X, CF287A/X and CE255A/X and other related cartridges do not infringe Canon’s asserted patents.

“Our stance from the very beginning of this was that our solution, marketed as SafeDrive, was just that – safe,” said Static Control’s General Counsel Skip London (pictured). “This ruling proves what we’ve known all along. Our design was a unique, non-infringing solution.”

The case is, in essence, partly technical, and partly legal posturing.  Technically, Canon has claimed a right through its patents to an angular or pivotal gear solution.  SCC has promoted, and patented, its linear gear solution.

Using its patent prowess, Canon then extended its patent claims to cover all moving dongle gear solutions.  SCC and others have refuted that claim, staking their claims to a permitted use of a linear solution.

“Canon is trying to extend its patents to a gear that they didn’t invent,” London said. “Static Control is determined to prove its gears are its own invention and don’t infringe.”

In February 2018, Canon brought another round of patent infringements cases against 49 aftermarket manufacturers, distributors, and sellers of new build compatible cartridges. These actions have been brought in U.S. district courts, and before the U.S. International Trade Commission (USITC).

All the patents in an earlier action brought by Canon over the dongle gear required a coupling member that was “tiltable” with respect to the OPC drum. When a cartridge with a “tiltable” dongle is inserted into the printer, the dongle moves from a tilted position to a straight position (relative to the OPC drum) as it engages with the printer drive pin.

When the cartridge is removed, the reverse occurs and the dongle tilts out of alignment with the OPC drum.  This tilting allows cartridges with an OEM style tilting coupling member to be smoothly engaged and disengaged from the printer drive system.

The earlier Canon litigation targeted copycats of the tilting dongle OEM design.  In response, the new-build cartridge manufacturers began coming up with “non-tilting” dongle gear replacements.  SCC, Ninestar, Aster and Print-Rite all came up with variations on a retractable dongle design.  In these designs, the dongle remains in line with the OPC drum, but is moveable in and out of the drum, somewhat like the plunger in a syringe.

Then Canon began filing “continuation” patents specifically targeting the non-tilting dongle designs.  Although filed with the patent office after the aftermarket designs were released, these continuation patents are treated as though they were filed in 2006 – when Canon first filed for protection on the dongle gear design.

This litigation led to a critical Markman hearing, a pretrial hearing in a patent infringement suit during which the appropriate meanings of relevant keywords in a patent claim are submitted by all parties to the judge for examination.

Canon sought to have its patents extended to all moving dongle gear configurations, while Static Control argued that it should cover only those claims that include pivoting movement.  The judge came down with definitions more in line with those proposed by Static Control Components.

“We pride ourselves on being the IP leader of the aftermarket,” London continued. “This is another instance that proves we take the necessary due diligence to give our customers the advantage of premium quality coupled with the most IP secure imaging solutions.”

No Quick End in Sight

The case now could take many turns.  The administrative law judge is expected to rule in the upcoming weeks on the case and a flurry of motions that all parties have filed, including for summary disposition of the case, which is unlikely.  Canon will likely ask the full USITC to review the decision. Then the USITC will decide whether to review the case.  If they take it then there is a briefing process that will end in a decision in four to six months.

If they don’t take the case, or if Canon is unhappy with the outcome, then the case could go the U.S. Federal Circuit Court of Appeals (and on up to U.S. Supreme Court after that.) SCC and the other respondents also have rights to appeal.

Canon may also elect to bypass the USITC and go to U.S. District Court, which would make the Markman order nonbinding.  And then the case could follow the same route to the Federal District Court and so on.  So hang on to your dongle gears.