You are here: Home /Features/Technologies/Cartridge Chips Printer Firmware and the Aftermarket

Cartridge Chips Printer Firmware – “The Backbone of Our Aftermarket”

There seems to be no end to the variations of cartridge chips technology and printer firmware changes these days.  The aftermarket has been in a reactive position to create solutions due to this since the late 1990s.  Companies like Canon®, HP, Lexmark®, Samsung and Epson® are a few of the largest to pioneer and perpetuate the use of chips on cartridges, with apparent success.  Today, most toner, inkjet cartridges are chipped.  This continues to greatly challenge the aftermarket to deliver suitable solutions in a timely manner.  The release of printer firmware updates for an installed base of printers has far-reaching implications on our aftermarket.   Optimistically, this brings many opportunities for those that can endure it.

Cartridge chip functionality is often misunderstood because it is complex.  A cartridge chip is a member of the printer system including the printer firmware, electro-mechanical and cartridge.  The different members of this system interact in ways that are invisible to the user except for the intended feedback through the LCD screen or LED lights on the printer and printed pages or reports.  When a cartridge chip is designed into this system and it plays a critical role in printer functionality due to the data it contains.  Cartridge chips are fundamentally information storage devices having EEPROM memory and do not make decisions about the data they store; printer firmware is responsible for decisions. Chips have electrical circuitry, are powered by the printer and contain a communications language that enables a response to printer commands.  This allows the printer firmware to read stored data or write data to the chip as required.  If the printer doesn’t power up the chip and issues a command the chip remains silent.

For cartridges having a chip, the OEMs factory load (write) it with data representing some form of identification (ID) to work in a specific printer or group of printers.  Sometimes, the same chip may work in a sub-brand, as predetermined by the OEM in the printer firmware.  The chip typically contains a unique ID like a serial number and a wide range of other data correlating to cartridge/printer function for the printer firmware to use.  For encrypted chip cartridges, encryption keys are created using groups of data in memory and are factory loaded in the chip to secure data transfer between the printer and chip.

There are many other types of factory loaded data on cartridge chips such as type, color, yield and region, capacity, toner manufacturer, manufactured date, production line information and many more.  Chips may have data that relates to imaging parameters for the cartridge like electrical voltages t the firmware can use for the developer roller, PCR and transfer roller.  When the cartridge is installed in the printer this chip data can be read in by printer firmware. Over the life of the cartridge the chip stores data written by firmware as required by system design. This may correlate to OPC and developer roller rotations or pages printed.  The practical (good) use of this data is that when a cartridge switched to second printer mid-life, cartridge wear can be considered so imaging adjustments can be made automatically made by the firmware.  Fundamentally the use of data on-chip to steer printer functions can be helpful.  The aftermarket has utilized chip data to create universal chips, extended yield cartridges or custom print parameters for given cartridge components.  This represents opportunities.

Chips come in a variety of sizes and shapes.  This is usually based on the communication technology which is either direct contact or radio frequency (RFID) based chips.  However, the greatest technology shifts occur with advancements in semiconductor technology.  Smaller geometry silicon wafer equates to increases functionality built into a chip of the same size for example.  This enables the use of smart card technology as a cartridge chip, supporting public key encryption such as AES or DES.  These chips have memory plus encryption to protect it, requiring much more complexity in the design.

Printer firmware is the brain of the printer system controlling the electromechanical and cartridge members. Firmware is the program code that makes decisions about printer operation and enforces them through error conditions or function changes.  The code is stored in non-volatile memory and is executed by a Central Processing Unit (CPU) to interface with sub-system controllers to manage printer functionality.  The result is control of printer functions step-by-step, user interaction of buttons, lights and LCD screens and data between external devices.  It also manages the imaging engine controller that drives the laser, electrical signals and mechanics for the toner cartridge and communications with the chip on the toner cartridge.

Firmware is factory loaded in the printer memory by the OEM and has the provisions to be changed by “upgrades”. The control of the code is limited by design to the capabilities of the subsystems that it communicates with and the consumer replaceable modules like the toner cartridge and drum or fuser unit for example.

Firmware is identified by its version number and is typically displayed on the printer LCD screen at startup or on a printed page such as a “Printer Configuration Page”.  Firmware versions are typically different between printer types but there can be many versions for the same printer type because of updates by the OEM.

Firmware is upgraded in order to alter a function of the printer and the result may not be obvious. For example, a change made to alter the text on the LCD screen indicating that a cartridge is “Non-OEM” is certainly more obvious than a change to alter the data tables for improved images under certain environmental conditions for example.  Firmware upgrades are useful to fix known problems like inaccurate cartridge yield reporting for example.  However, not all upgrades are aftermarket friendly and could cause some cartridges to fail in the printer. These days it is typical for upgrades to occur automatically by the OEM. Settings for automatic upgrades are sometimes default set during the installation of the printer driver and is overlooked during quick installations.

Firmware and its specific interaction with the toner cartridge acceptance and performance are tightly coupled together with the data loaded in the cartridge chip.  In printers utilizing cartridge chips, the firmware has the flexibility to control printer electrical voltages or laser adjustments within the range of printer design.  This allows for compensation due to variances of components during the manufacturing process, wear properties of components by the data stored on the cartridge chip from the factory or written by the printer during use.  This is done to maintain desired print density or control the number of capable prints, considering the components in the cartridge.

Firmware verifies cartridge ID upon the initial read of the chip.  Most printers today use encrypted communications. This has been the most challenging aspect of aftermarket chips since 2008 because encryption keys must be harvested from used chips to make replacement chips.  This is the basis for one of the most deliberate firmware upgrades by the OEMs, to lock out cartridge chips having known duplicate keys. 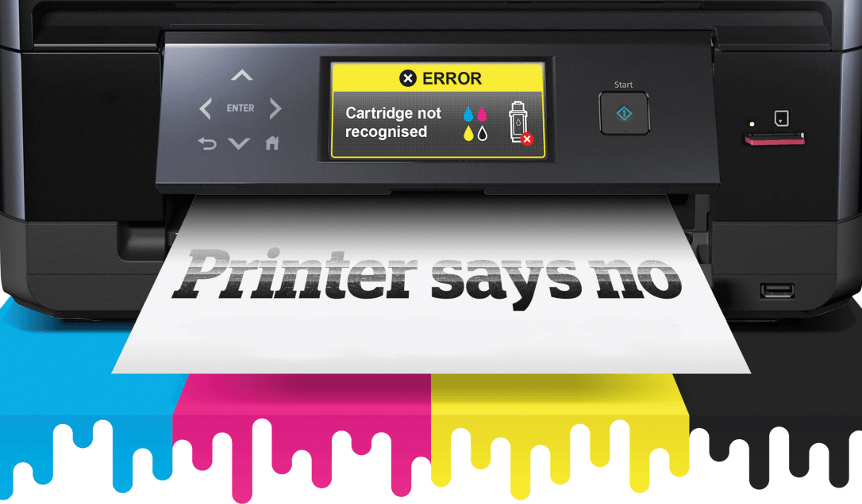 In general, chip use on cartridges started as basic EEPROM memory chips used by Xerox® and Canon® for example.  These were primarily to store brand identification and cartridge type information. This replaced plastic keying features on the cartridge that engaged with the printer indicating cartridge ID and type information. As memory technology has evolved by silicon chip manufacturers through the years, the OEMs such as HP®, Lexmark®, Samsung®, Epson® and others have demonstrated consistent use of the leading-edge semiconductor technology to maintain to their brand protection.  The introduction of highly encrypted smartcard technology continues to be a barrier for the aftermarket in terms of technical and legal aspects and its interference with business functions.

Aftermarket cartridges with chips must conform to the OEM functionality and maintain form and fit while respecting intellectual property (IP). Anything less than this is a risk of inferior printer performance or “Lockout” by firmware updates and both result in a bad end-user experience.

IP related issues for chips are among the most challenging that we face.  Understanding IP in the OEM chip comes with a huge engineering expense. Anything less than this may result in a manufacture’s inability to defend against the OEMs. Be proactive and get a good understanding of your supplier’s capabilities to avoid surprises.

Are you impacted by the ongoing updates and changes to chips & printer firmware? Share your experiences (and frustrations, in the comments.

Lynton Burchette’s article Cartridge Chips Printer Firmware appeared in the RT ImagingWorld magazine. Each edition of the magazine can be viewed and downloaded here.

Making It Easy to be an OEM Distributor: Pantum releases its innovative printer... Katun: how do they remain innovative and retain longevity?
Scroll to top