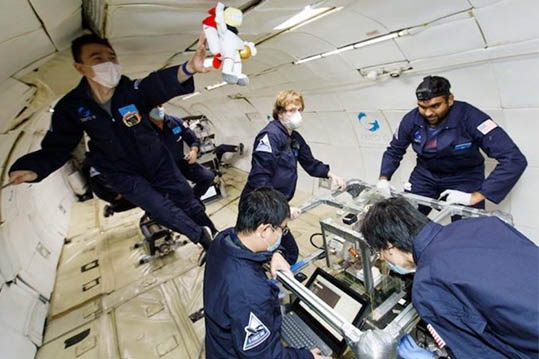 According to 3dprintingindustry, a group of researchers known as the No-Gravity Ink Jet Printing for Aeronautics and Space or ‘NINJAS’ team have come up with an alternative that enables astronauts to repair electronics on the fly.

According to the team, these materials are well-suited to electronics production as they allow for ultra-stable, high-resolution printing, and with further R&D, they could enable the creation of a new class of flexible sensors, soft robotics, circuit boards, semiconductors and other micro-devices, both in space and here on terra firma.

As a first step towards putting their approach to the test, Qin and his team built a prototype 3D printer in late-2021, while Iowa State colleague Shan Jiang worked from his lab to perfect his set of conductive inks ahead of parabolic flight tests.

“The main goal of our experiment was to print a conductive circuit pattern in microgravity,” added Qin. “We tested multiple types of ink with different material properties, such as density, surface tension and permittivity, while pinpointing the optimal operating conditions, including voltage, pulse frequency and nozzle orientation.”

NINJAS tested the prototype through a parabolic flight simulating conditions in outer space. NINJAS claimed that managing to operate the system in zero-gravity was no mean feat in itself, and described it as akin to “jumping from a building that’s 30,000 feet high for 20-30 seconds.”

“The zero-gravity environment wasn’t even that difficult to adjust to the feeling of,” explained Matthew Marander, one of the Iowa State students that flew as part of the project. “What I felt was more difficult to deal with was the feeling of rapid transition between hyper-gravity, the normal gravity and zero-gravity. Switching between all of them so quickly can feel a little bit disorienting.”

In terms of the printer’s performance, Jiang concluded that the first day of the three-day test was a learning experience for all involved, but over the second and third, the team were able to 3D print “some nice patterns.” Following their initial success, the researchers have now doubled down on their research, developing upgrades for their system and materials ahead of a second test in May 2022.

Please leave your comments below for the story below “New Approach to 3D Printing in Space.”