The North American imaging supplies marketplace has been severely impacted by the introduction of new-built cartridges from China. This is not news.

Industry analysts and their intelligence support the trend of consumption of new-built cartridges and away from remanufactured cartridges. The internet has driven this trend as bargain-basement-priced cartridges are sold widely across platforms.

What are the North American cartridge dealers doing? The Int’l ITC reached out to its database to ask about the impact of Chinese companies and their products.

The invitation to take part in the survey was extended and an astounding ten percent of those invited to take the survey did so. Clearly, the issue was of importance, and the comments the survey takers made bore that out. While the survey consisted of only five questions, the complex nature of the Sino-American cartridge industry relationship made for complicated answers.

The top takeaway? Low-cost new-built cartridges are in demand. Meeting that demand is not done easily. Cartridge dealers are being quite creative – and diverse–in the way, they maintain sales of remanufactured cartridges while also buying new-builds to meet the demands of the marketplaces. However, almost all admit that their relationship with their Chinese vendors is far from seamless. And the Chinese cartridges can be of high-quality, but the quality is inconsistent.

The strong showing in the “other” category was because those respondents had purchased the cartridges through a well-known North American intermediary. 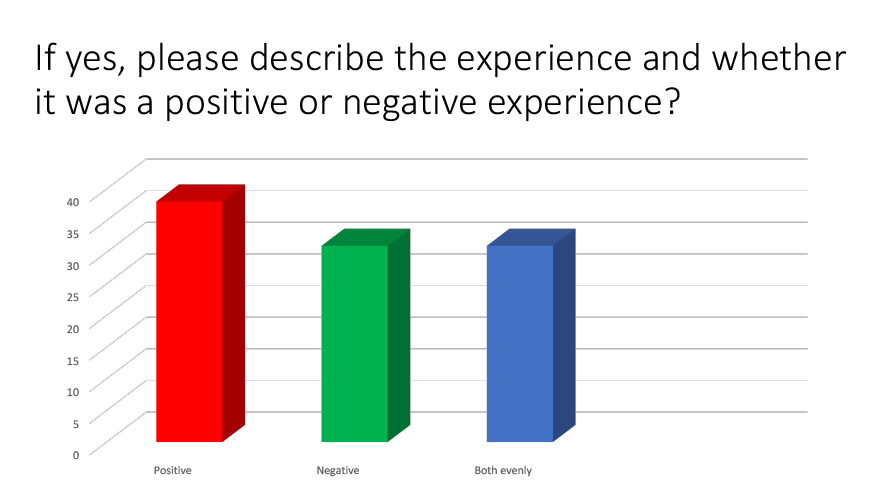 It is no surprise that the larger the company, the better the experience with Chinese suppliers.

There were very few wholly positive responses, as many cited communication problems. 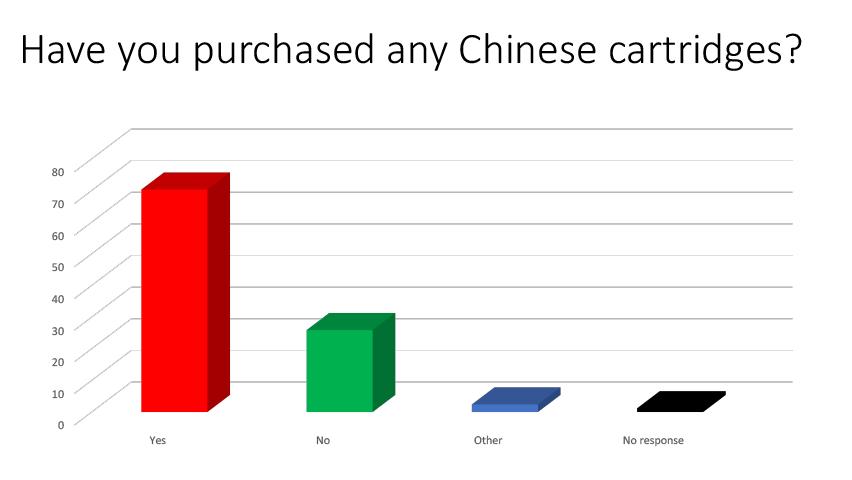 It comes as no surprise that the clear majority (70.3 percent) of North American respondents had purchased Chinese cartridges. This falls in line with what other industry analysts have reported, that there is a clear shift towards new-built cartridges. It is interesting, too, that 30 percent have refused to try them. 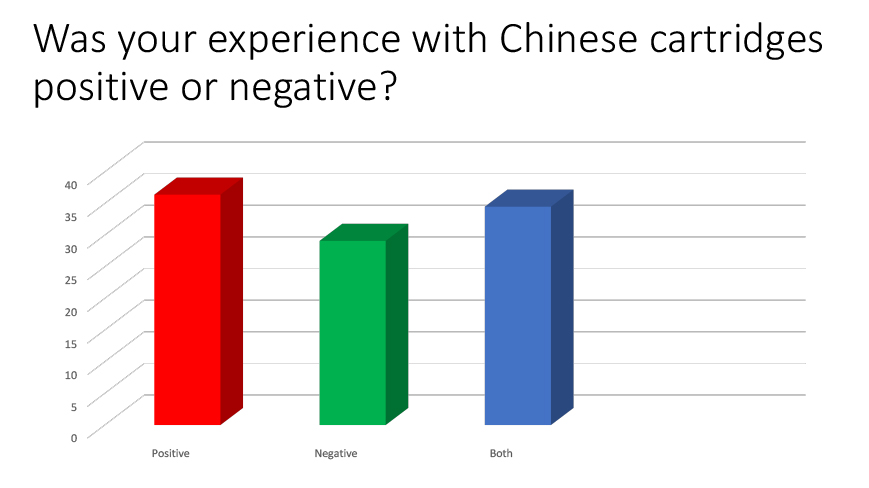 The positive respondents were forthright about the need to switch.

As one of the anonymous respondents from the Midwest said, “Buyer beware.”That seemed to be the theme of many of the respondents.

Even those that responded positively had some caveats for buyers. “If you’ve put in the upfront work necessary, and implemented your quality procedures, the outcome will be positive,” said Matuska (of Katun).

Some use the new-builds to supplement their offerings while they wait for the remanufactured alternative to become available. “I have purchased them when my regular remanufacturing partner is not yet producing a particular cartridge,” said Neal Brush of Lasers Image in Virginia. “I have actually had some very good luck with most of the ones I have used. I do always go back to my US-based remanufacturing partner when they release their product.”

Those respondents with reservations cited failures and, once again, poor communication for reasons they had mixed or negative experiences. “The quality of the product varies greatly,” said Paul Mervis, Encore Images in Maryland. “And technical support is virtually non-existent.”

Here’s a twist as well. At what point does the Chinese cartridge with sufficient quality become too expensive?

What is your opinion of Chinese companies in the industry in general?

This question allowed the respondents to unleash their love— or frustration— with the Chinese manufacturers and the products they are producing. Clearly, this group was divided into two camps: those that see these cartridges as a necessary evil, and those that wish they would just go away.

However, there are other issues beyond price and quality. Our respondents question Chinese sales tactics. The products also damage the environment in a way that remanufactured do not. They also pose a litigation risk as they present potential intellectual property issues. Finally, almost all decry the economic impact of the new-built cartridges on the North American marketplace.