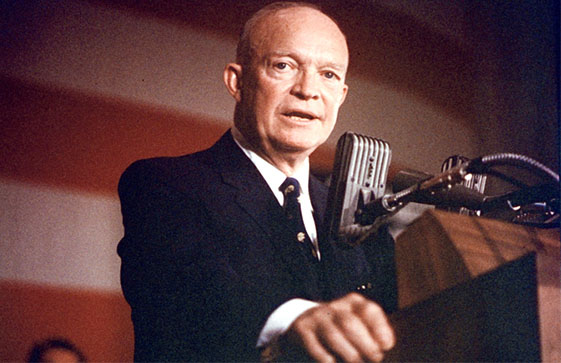 Coming out of WWII in 1945, America was perhaps the most fortunate post-war economy. Unlike many of the other countries around the world, the USA was comparatively thriving.

This was due in part to the “New Deal”—an economic policy proposed by Roosevelt which was built on the idea that stimulation of the economy would help the country to move out of recession and economic trouble.

The following president, Harry S. Truman continued this economic stability through investment in welfare schemes and the adoption of a new international monetary control system called “The Bretton Woods System.” It was tied to the US dollar and allowed America to boom as an international trader and an effective de-mobilisation of wartime industry.

This economic policy played into the Republican tradition of keeping a tight guarding hand on the federal reserve and is generally characterized by reduced taxes, reduced spending and privatisation.

What is important about Eisenhower, however, were the adaptations he made to this traditional policy, and the success that this bred.

Though Eisenhower did attempt to keep tight controls on spending, implemented privatisation (which led to a boost in the local economy) and reduced taxes, he also maintained some of the previous policies of welfare investment that stemmed from “The New Deal,” adapted to newly emerging credit and used a materialising technology age to his advantage.

His keeping with some of the traditional Republican economic policies was beneficial in promoting public spending and consumerism due to tax cuts and led to many taking out newly available low-interest housing loans, creating a housing boom and suburban growth.

He also used his position as a decorated army general to advocate for reduced military spending which he used to re-invest into the domestic community.

Following the policies of the “New Deal,” Eisenhower maintained funding for veteran education and spent $26 billion in 1956 on the Interstate Highway System—a prevalent road system spanning across states which encouraged private investment in areas previously unavailable to the public. This was a further adaptation on Eisenhower’s part to increased post-war private investment and the growing prevalence of cars.

Furthermore, riding the wave of television and media, Eisenhower used advertising to his advantage as no other president had done before. Catchy campaign adverts and segments such as “Eisenhower Answers America,” which crossed a rift between the President and Public, creating more federal trust.

This all worked to Eisenhower’s advantage in creating what is commonly referred to as the 1950s consumer society- Eisenhower’s adapting policies led to a boom in private investment, and public spending which eventually made America the most dominant world superpower.

By 1960 the American standard of living was the best in the world; Americans owned half of all cars and televisions in the world, US companies like Ford and Chrysler saw increases in cars sales from 5.1 million to 7.9 million and the GDP rose from $355 billion to $488 billion.

Under Eisenhower, the economy grew by 37% however this only happened due to his adaptive policies of conservatism and investment. These two ideas may seem contradictory; however, this policy was effective due to Eisenhower knowing when to use one and then the other.

This is also prevalent in the business market where awareness of trends can determine which products to invest in and push or whether to be more conservative towards others.

And it can also be applicable when looking at your business model as a whole: consider your company as being America. Which areas need improvement? Which areas are working well as they are?

We can also take a constant desire for growth from Eisenhower. Yes, the economy was thriving when he came into office, having grown by 90% since wartime. He anticipated future difficulty and sought to strive for further economic strength.

Therefore, an awareness of where to promote growth and a desire for greatness can lead to a more balanced and adaptive machine which—with future possibilities of hardship—will be able to maintain strength and stability.

He has become a trusted advisor for small organisations across the world. Turner invites you to chat with him about your business, reaching out to him on LinkedIn, email or on the phone +44-7887-548523. Especially on this topic: The Matteo Ricci Strategy to Find Middle Ground.

Please add your comments below about Darren’s post, “The Matteo Ricci Strategy to Find Middle Ground” or go to LinkedIn and join the social media conversation.