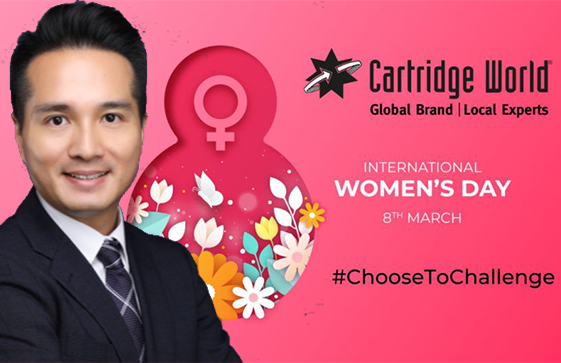 The annual International Women’s Day (IWD) is a time to reflect on progress made, to call for change and celebrate acts of courage and determination by ordinary women, who have played an extraordinary role in the history of their countries and communities.

To this end, Cartridge World joined and showed support to this year’s IWD campaign which themed “Choose to challenge.”

“It’s important that Cartridge World can show their global customers and the global community that they care about celebrating achievements and calling out inequality, ” so says Edwin Lui, global CEO of Cartridge World.

Cartridge World told RT Media that they will start the campaign by posting on social media selfies raising a hand to show support and solidarity with hashtags #ChooseToChallenge, #IWD2021 and #CartridgeWorld. Also, participants are encouraged to invite their own followers, friends and family to join the campaign.

In addition, the global brand is also initiating a series of online campaigns including inviting all its global partners, licensees to run the exact same campaign and feature coverages to celebrate their global female franchisees, friends, and colleagues. There is even an initiative for masters and franchisees to run a competition or prize draw.

“Women are a very important factor for the eco-system of our industry, from manufacturers to suppliers, retailers and customers. As a global franchisor with a diverse group of staff, franchisees and partners with different nationality, race, gender and generation, we have been a strong advocate of inclusion and diversity but there’s just more work to be done,” Edwin continued.

“We are proud to participate in the International Women’s Day 2021 campaign and #choosetochallenge through our commitment to increasing the number of women franchisees in our network to further promote gender parity. We also invite our Cartridge World partners and fellow industry players around the world to take action and to #choosetochallenge. Gender equality doesn’t happen overnight, but if everyone can take a small step toward progress, we will get there sooner together,” Edwin added.

RT Media also would launch an online campaign to collect women’s achievements in work from within or beyond the industry as well as their stories to fight for equality. RT Media wants to honour all who submitted their stories on March 8th.